Sock it to me, baby! A romance full of passion and puppetry | TRNTO.com
Skip to content 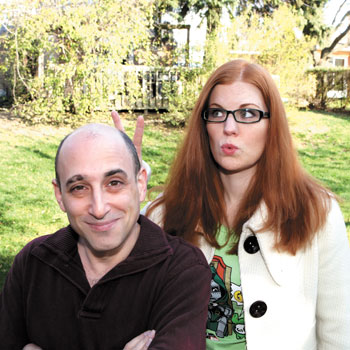 Entertainer Steven Kerzner is best known for performing as Ed the Sock, the perpetually curmudgeonly host with a cigar in his mouth. But he has a soft spot in his heart for his wife, Liana, who helped produce his show and evetually became Ed’s co-host, Red. They fell in love and married in 1999. Thirteen years later, they are still going strong and share a passion for the entertainment industry, comic books and video games. Their new series, I Hate Hollywood, debuted in September. Here, the couple shares their story:

The first impression
Liana: We met at a bar where Steven (as Ed) was doing a live show. Obviously I was aware of what he did and liked it, so that was a plus. But the thing you quickly learn about Steven is that his character is just that — a character. Steven is very different [from Ed the Sock].
Steven: I was hosting a weekly gig as Ed at a Toronto bar, and a guy I’d met a previous week brought his girlfriend, Liana, to show off that he knew me. She was pretty, smart, full of life — and I couldn’t figure out what she was doing with him.

Falling in love
Steven: Her beauty and physical assets were the first thing I noticed about her, but her intelligence, charm and personality were what hooked me and still impress me.

The proposal
Liana: I don’t remember the exact words he said because it was a pretty emotional moment. I remember that it made me feel special for a few blissful moments in a week that had me feeling like I was nothing.
Steven: In retrospect, the proposal was not the kind I would do if I had a do-over. I got the engagement ring and was so excited and eager. I just went home, found Liana asleep, woke her up and proposed.

The big day
Steven: We got married at the Estates of Sunnybrook. We gambled on an outdoor wedding, and the days preceding it were a sweltering heat wave, and rain was forecast for our wedding day. Thankfully, the rain didn’t come, and the heat wave broke for our wedding day, so it was just the right temperature for suits and dresses outdoors.

Their special bond
Steven: Liana and I share interests in “geek” pursuits; though, with her knowledge and profile in that world and her famous costumes [at comic conventions], she trumps me. Our wedding rings have the Superman shield on them.

Secret to their success
Steven: Working together from home, we have been together virtually 24/7 for 15 years. I don’t think most couples could do that. I have learned so much from Liana that has grown me as a person. I have immense respect for her and appreciate her patience when I have not always been the person I could be. I love her more every day.

Relationship advice
Steven: I think respect and admiration has to be a bedrock —and willingness to grow in ways that benefit your partner.
Liana: I think what it comes down to is that being married isn’t something you just think about when you get around to it. It’s something of value, and you have to treat it as such.