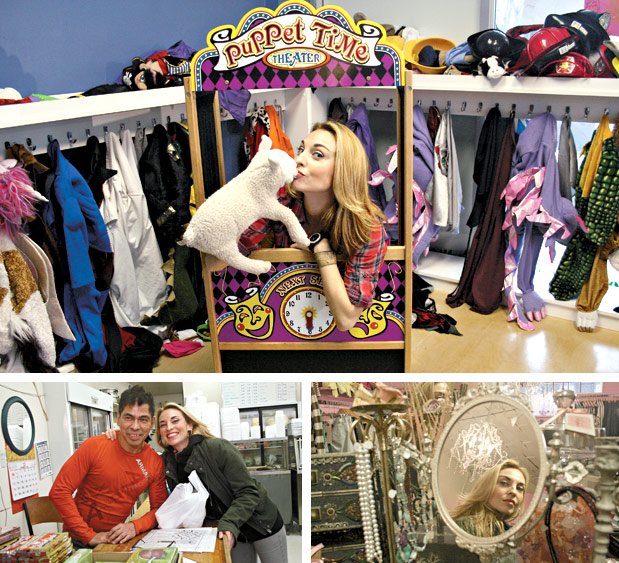 If you ask Inga Cadranel what her background is, she’ll ask you how long you’ve got to hear the answer.

Her features — silky blonde hair, olive skin, feline-esque brown eyes and dark freckles — are striking to say the least. So much so that when I meet the upcoming star of new detective series The Bridge (premiering this winter on CTV and CBS) at St.Clair West and Bathurst, I’m forced to conduct an investigation.

“I’m Icelandic on my mother’s side,” she explains, shedding light on the origin of her first name, “but my father,” she says with an intake of breath, “is Spanish, Egyptian, Russian and Romanian.”

Extensive as the list is, Inga’s recitation is coloured with obvious pride — a sentiment that influenced her to trade in her Kensington Market neighbourhood for this one about four years ago.

“This has always been a multicultural area,” she says, “People think of it as old Little Italy, but it’s so much more. When I first came here I felt it was really mixed and that’s my favourite thing about Toronto. That’s our signature I feel, the multiculturalism.”

A native Torontonian, Inga reminisces about visiting the area as a teenager as we sift through heaps of funky trinkets at our meeting place, Parpar Boutique. Inga cites the pink-hued gift shop with its vintage décor and unending treasure supply as one of her favourite stores on the strip.

“You can find anything here,” she says. “It’s one of those places where you come in and it’s laid out so beautifully that you just want to buy it all.”

It’s at Parpar that Inga first brings up her four-year old son Ryder, whose birth prompted her move to the area. She says that although the diversity of the area was a draw, the main attraction was its family-friendly atmosphere.

“This area is removed from the craziness of downtown, but still close enough so that my husband and I can go to auditions and feel like we’re still in the hub.”

Auditions for the stunning actress are coming in droves these days.  With a hefty resume under her belt and  The Bridge on its way she’s finding it difficult to relax. Those rare moments of alone-time however, she reserves for Mignon Cuts nail salon.

The moment we walk into the quaint shop she’s recognized by the staff.  They form a receiving line as customers gaze on with grins. The manager insists she sit down for a  touch-up, and she doesn’t resist.
“

My son gets his hair cut here while I get my nails done,” she says, gesturing at a fire-truck shaped kid’s seat propped up directly across from a small HD screen television.

The TV is purposely poised to distract youngsters from what is often a dreaded occasion. “It’s genius,” she adds.

With freshly fancied nails Inga strides out of the shop and crosses the street to Barrio Fiesta on the north side of St. Clair. The Filipino fast-food joint is busy for lunch.

“Looking beautiful,” booms the owner, Simon, from across the counter as Inga goes in for a hug.

“My best friend as a kid was Filipino. I went to the Philippines with her family and fell in love with the food. When I moved to this area I was so excited to find this place. I got to know Simon, and he’s so sweet and follows my career. Plus he’s great with my son.”

It’s clear that this welcoming atmosphere is crucial to Inga as she pays for an order of chicken adobo and lemon sinigang soup. Running through a list of other food spots she frequents, the common ingredient seems to be the family-like feel.

“When we want pizza we also go to Da Maria’s,” she says referring to Da Gianni e Maria Trattoria down the street. “My husband and I go in with our son and they give him loonies and toonies on his birthday.  A lot of love there.”

Finally our journey takes us east down St. Clair to Vaughan Road, where the huge Amazon Indoor Playground is visible to everyone within a two-block radius.

The vast indoor rumpus room is equipped with a puppet theatre, huge play structure, ball pit, and perhaps most importantly a coffee corner for pooped parents.

Inga seems most comfortable here, navigating her way through a sea of happy toddlers who seem drawn to her energetic presence. She explains that she and her husband bring Ryder here all the time, and muses that she’s met the majority of her neighbourhood pals in this location.

“It’s such an unpretentious area,” she says “It has a bit of everything and a bit of everybody. But above all I love it because it reminds me of my little boy, who we’ve raised here, and of the most fulfilling and amazing four years of my life that I have had since he was born.”