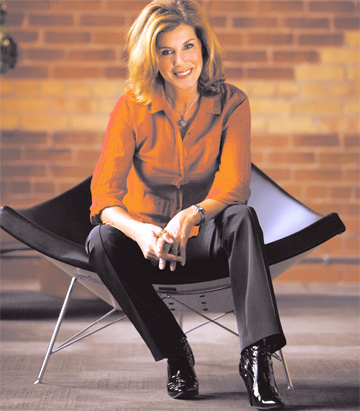 FOR SONJA SMITS, the Canadian icon who we’ve been watching on television for almost three decades (Street Legal, Traders and The Eleventh Hour), starring in the edgy play That Face this month means a return to her roots, and she couldn’t be happier about it.

“I started in theatre, you know. That was my first love. I went to theatre school, and that’s where I first started — onstage,” she says. “What I like most about theatre is the process. I love the rehearsal process. I love the fact that you have a month, in this case, to work almost essentially with the other actors and the director on how you want to do it and playing with that.”

It’s a warm autumn day, and Smits is on the patio at Caffe Doria, looking just as she does onscreen but softer, more feminine and younger. A chunky beaded necklace rests against her neck, and she is sporting sassy spectator pumps that are unexpected and daring.

It’s no wonder she’s being stared at. But Smits lives in the ’hood, so maybe it’s just neighbour curiosity rather than celebrity gawking.

Smits, her husband Seaton McLean, the former head of film production for Alliance Atlantis, and their son and daughter have lived in Rosedale in the same house for the last 17 years or so. That puts her close to her favourite restaurants and shops — here at Doria for coffee, Pastis for casual dinners and seafood at Pisces.

The very picture of domestic bliss, you might say. But in That Face, Smits is far from your typical housewife. The award-winning play, currently on now at the Berkeley Theatre on Berkeley Street, sees Smits playing the pillpopping alcoholic mother of an uppercrust family.

“It’s a fun character,” says Smits. “They’re a very eloquent family, the kids are in private school, they have all of this. From the outside, things probably look pretty good. But it really says to me about what happens when children end up parenting parents.” A bit dark, perhaps, for a woman who’s known for PG-rated CBC drama — but that’s half the fun, she says.

“It was interesting. When I read it for the first time, I thought, ‘This is awful, and then I’d start laughing, and I’d think, ‘Oh my God, I’m laughing. But this is so awful — but I’m laughing.’”

Written by award-winning English playwright Polly Stenham when she was just 19 years old, That Face offers an edgy and real — often uncomfortably so — look at a wealthy family, whose various dysfunctions and vices are laid bare when their daughter is expelled from private school.

When the play’s director, Kelly Thornton, came upon That Face she sent it to Smits immediately. “She said, ‘This part has fangs,’”recalls Thornton. “It’s an amazing, amazing role. Sadly, there are fewer and fewer roles for women. Sonja is shining in it.”

Of Smits’ various roles on stage and on screen, it’s Street Legal we remember best. The one-hour CBC legal drama ran from 1987 to 1994 with repeats running into this year. Smits played Carrington “Carrie” Barr alongside Canadian actors Eric Peterson and C. David Johnson. In its last six seasons, it regularly drew about a million viewers and a devoted following. When the show was airing, says Smits, “people would shout out my character’s name, which was cute.”

So how did a girl from an Ottawa Valley dairy farm end up on a hit television series? Smits came to Toronto to attend theatre school at Ryerson. After two years, she took a summer theatre job in Quebec City where director Ken Livingston invited her to join his new company in London, Ont., Centre Stage.

When CBC casting directors saw the show, they asked her to audition for a CBC movie, Tyler, for the part of a farm girl.

“I arrived for the audition very nicely dressed in a skirt and heels. Most of the other actresses were dressed in pigtails and gingham. When I was called back for the final audition, they pleaded with me to wear something more ‘farm girlish.’ I said, ‘This is how a farm girl would dress for an important meeting, but if you really want, I’ll wear jeans.’ I got the role.”

Since then, Smits has been a regular on stages across the country, including the Tarragon, Toronto Free Theatre and the Canadian Stage Company, starring in The Graduate, George P. Walker’s Nothing Sacred and Judith Thompson’s Perfect Pie.

She interspersed those roles with film and television work: alongside Deborah Harry in David Cronenberg’s 1983 film Videodrome, was in a television biopic about Judy Garland and been in big screen films such as Owning Mahowny, How to Deal and A Different Loyalty, starring Sharon Stone.

Back then, acting was the most important thing to her. Now, she says, she has other interests and waits for the right role to come along.

“I want to do [roles] because I’ll get something out of it, because I think acting is like a precious thing — I don’t want to waste it. I’ll do something else. I’ll read a book,” she says.

She was elected president of the board of directors at Harbourfront this past June (the first professional artist to be named president) after being a member for several years. She supports the Parkdale Women’s Shelter, the Redwood. And then there are her kids and family.

Like starting a vineyard in Prince Edward County, for example.

The country girl moves back to the country? It wasn’t planned that way. “It wasn’t until we’d already bought the land, put some vines in and started worrying about the weather that I realized, ‘Oh, I’ve come full circle.’”

Smits and her husband bought the land about 10 years ago.

But back then, they were among the handful of vineyards in the area. Now they are one of about 50. Wine from their estate wine, Closson Chase, is available through the LCBO Vintages this month.

“When I first started out, people would say,‘It’s Canadian and it’s good?’ So the level has gone up, and the expectation has gone up too. And it’s nice to be a part of that growth, and that’s a cultural thing, too, which I didn’t even think of that. So I’m still in the cultural industry, but now it’s wine.”

And despite having recently bought a farm about eight kilometres away from the vineyard, Smits is not ready to give up city life entirely. Thank goodness. Then who would the neighbours spy on?