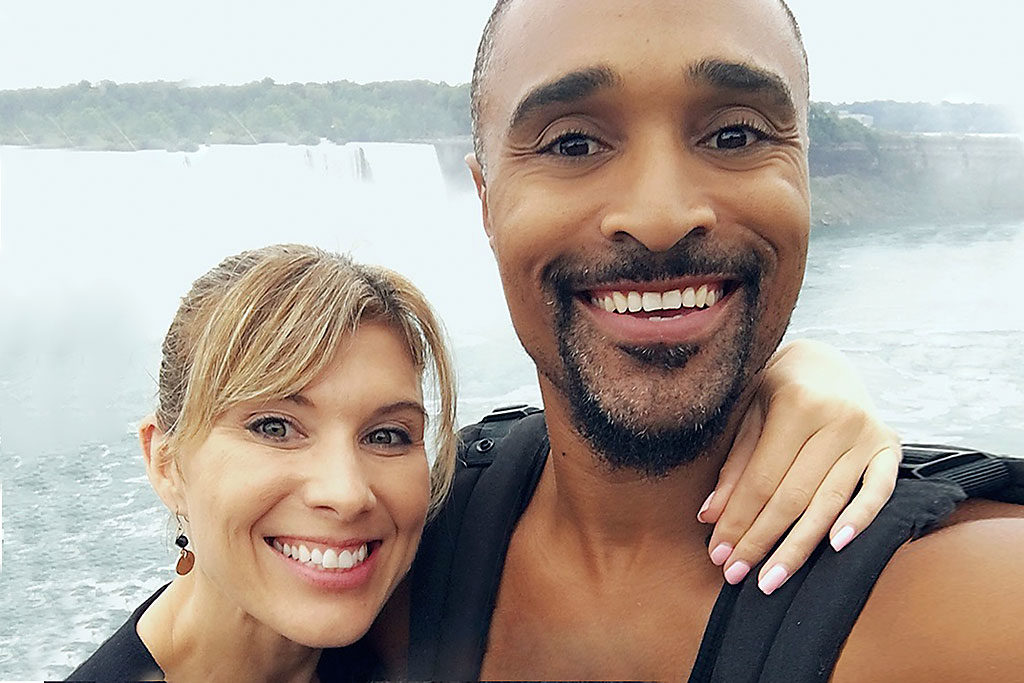 Juno Award-winning R & B singer Sean Jones has returned to Casa Loma this summer for his Monday night Soul in the City concerts, which kicked off June 3 and run until Aug. 27. He will also be performing as part of the summer concert series at Jackson Triggs Winery in Niagara-on-the-Lake on Aug. 10 with special guests Jackie Richardson and Molly Johnson. Here we find out how Jones met the love of his life, Andrea.

Many moons ago I was part of an R & B group called In Essence. The band and I were invited to a wrap party for a TV show called Platinum. We were on our way out when I walked past this stunning woman with a gorgeous smile. Our eyes met for a moment, and I felt like I had to go up and talk to her. I of course had to wait my turn as she was being hit on by another Canadian musician. I waited until he had moved on, made sure my breath was OK and proceeded to introduce myself. Who knew 15 years later we would still be together.

We exchanged numbers at the party, and I gave her a call but got her voice mail. When I hadn’t heard back from her in a week, I figured she wasn’t interested. Truth was she had gone out of town and ended up giving me a call when she got back. Our first date was at Demetres [a dessert café]. We sat and chatted for a couple hours. I think I did most of the talking. She actually thought I was conceited, but I was just really excited about the fact the group had been signed to a record deal and we were about to travel to Cuba to film our first video. Anyhow, some of my charm must have crept through that conceitedness because we made arrangements to meet again weeks later.

I think you can describe our courtship as slow and unsteady! Lots of ups and downs. Breakups and makeups. I had just gotten out of a long-term relationship and was in a boy band doing some pretty exciting things. Settling down was not on the top of my list at the time, and to make things even more complicated, Andrea had four beautiful young children from a previous relationship that I had to consider. I wasn’t sure I was ready for another relationship let alone one that would make me a father. All that being said, I started to have deep feelings for all of them. I know I broke her heart — probably a couple times — trying to figure out what I wanted.

I’m not sure when we actually made it official. In fact we really don’t have an anniversary to speak of [as common law spouses]: something Andrea reminds me of each year! I’ve actually tried to find out the date of that first party we met at numerous times, but no one seems to have a record of it anywhere — including the restaurant that it was held at. I think she just broke down all my defences over time, and eventually I had no choice but to surrender to her love. Sounds like a song lyric doesn’t it.

Andrea and I recently had a child together. Her name is Savannah, and she is 19 months old.

We both share similar taste in music, movies and TV series. We try to watch the big ones together. The other person isn’t allowed to move on to the next episode until we’re both caught up. It can literally take us half a year to get through a 10-episode series because of this unwritten rule.

I think we complement each other. I have a ton of patience where she has very little. I’m a total dreamer with my head in the clouds. She is much more pragmatic and realistic in her approach to things. Not to say that we don’t butt heads at times because we definitely do, but at the end of the day, we always come to the realization that we just want the best for each other.

I can see us doing a lot of travelling when we retire. There are so many places on our bucket lists that we have yet to visit. We both love the beach and warm weather, so hopefully we’ll be spending the winter months some place warm. And we hope to be surrounded with grandkids that we can spoil. I see the joy that Savannah brings to my parents, and I look forward to that time in our lives.