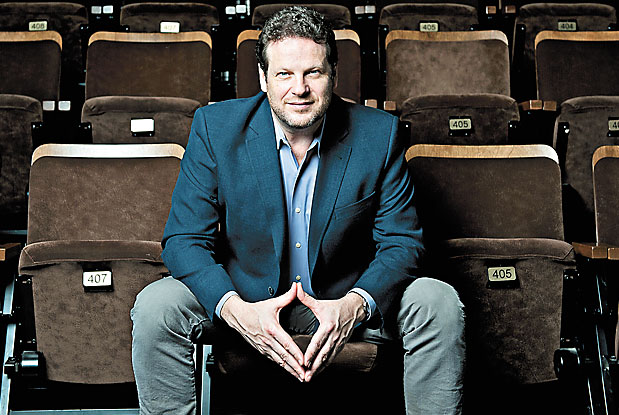 For Soulpepper’s 17th season, founding member and artistic director Albert Schultz is scheduled to reprise his role in The Norman Conquests trilogy and to direct four shows. Busy, sure, but variety is the spice of this impresario’s theatrical life at the helm of one of the country’s most successful theatre companies.

Although Schultz says he has “an abnormal energy level” and is “blessed with stamina,” his biggest challenge in keeping on top of his varied responsibilities is simply time.

“Time management gets really tricky. I’ve learned how to completely compartmentalize. I put things in blocks of time,” he says.

“I have amazing people around me,” he continues. They tell him who he’ll be meeting with and about what. “I improvise a lot in those situations,” he says. “I walk into a room and say, ‘Now what?’”

There’s a bit of “now what?” in selecting the season’s lineup.

Soulpepper has just announced their lineup of shows for 2014 (up to September). They’re keeping their options open after the summer. So far, they’ll be taking us to the brink of war (Idiot’s Delight), to apartheid-era South Africa (The Road to Mecca), to 17th-century France (Tartuffe), to the autumn years of Romeo and Juliet (A Tender Thing), and home again (Glenn). They’ll bring us three other classic stories, plus revivals of last year’s hits The Norman Conquests and Angels in America.

In an era when the public’s attention can shift in the time it takes to send a tweet, it’s hard to know what the city will want to see 10 months from now. But Schultz is counting on theatre-goers sharing his interest in the anniversaries of the outbreaks of the First World War (100th) and the Second World War (75th).

“We think of [the Second World War] starting as a big surprise, but the intelligentsia knew exactly what was going on in the world,” says Schultz. “We’re three weeks into rehearsals, and the more we get into this play, the more I love it! It feels very much like Casablanca but more effervescent, with all the same romantic, philosophical and emotional underpinnings.”

Schultz says the audience keeps coming back because Soulpepper has diversified their offerings.

“A theatre like Tarragon has, in some ways, a much harder job,” he says. “Putting on a whole season of new works. That really is like playing the stock market because with every play you just don’t know. We have the advantage of putting on plays that have been proven in the past. You could call it the blue-chip advantage.”

For more information, go to www.soulpepper.ca