Stellar talent on display in rude and crude show | TRNTO.com
Skip to content 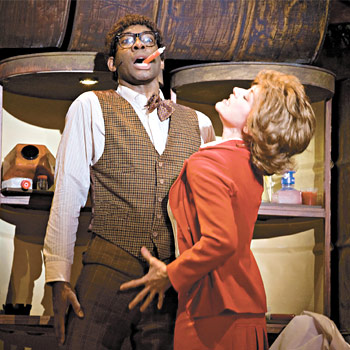 THE TOXIC AVENGER is Aubrey Dan and Dancap’s second major show they produced themselves, both of which are about New Jersey: Jersey Boys, of course, is the brilliant musical about the Four Seasons pop group. And now The Toxic Avenger, a wildly entertaining, crude, silly but delightful small-scale musical (five actors, all brilliant, playing more than two dozen parts) at the refurbished Music Hall, a 90-year-old theatre on Danforth Avenue. Its opening (and most of them, hilarious) song is, fittingly, “Who Will Save New Jersey?” Dancap clearly will.

The musical opened off-Broadway to wildly positive reviews this past spring, winning the Best New Musical Award. The script, while uneven, is filled with guilty pleasures: blind-girl jokes, vulgar exchanges, perfect parodies of Bruce Springsteen and Bob Dylan at their weakest and a subject dear to billions today — environmentalism and political corruption. The plot is hardly worth noting (a nerdy fellow is dumped into toxic waste and turns into a monster eager to save his beloved state from being polluted to death), based on a terrible, amateurish movie that lacked the musical’s wit, zany jokes and superb acting.

Toxie, as the title character is called, is played flawlessly by the very young Evan Alexander Smith, and Brittany Gray is brilliant as the voluptuous, oversexed, stunned blind girl Sarah. (Yes, there’s a song sung by our hero, “Thank God She’s Blind,” and once you see Toxie, you’ll know why he’s thankful.) Our much-loved local stage icon, Louise Pitre, plays three roles, two major, and her singing and acting genius displayed in Mamma Mia and Les Miserables have not lessened. All are good, but the man who plays Black Dude in countless roles, Daren A. Herbert, is astonishingly gifted.

The Toxic Avenger is not perfect. Joe DiPietro’s script drags at times, and David Bryan (of Bon Jovi) writes decent rock songs but few are memorable. It’s often vulgar and occasionally obscene but exceedingly funny throughout, and one senses that it could run for years: with dozens of its 1,000 seats selling for $20 each and rush seats for $15 — little more than a movie! — a whole new generation of theatre-goers (well, above the age of 13) may discover the magic of live theatre. Dancap, has hitched its wagon to another very successful show.