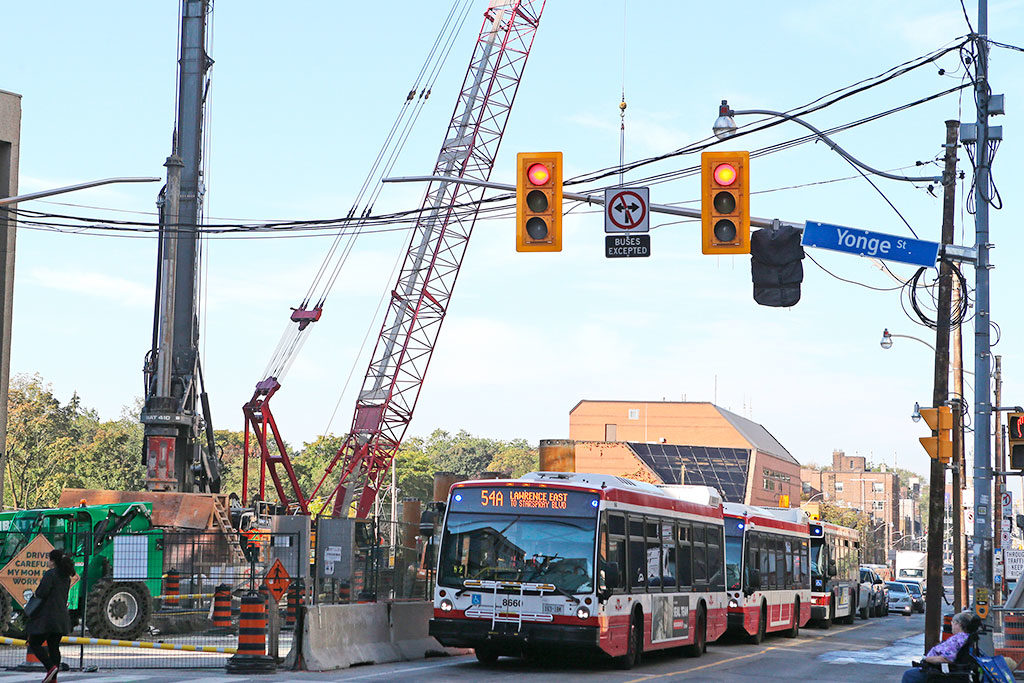 Nearly 100 years ago, the Toronto Transit Commission, then named the Toronto Transportation Commission, purchased nearly 10 acres of land at Yonge Street and Eglinton Avenue. Since the TTC did not need all the land to operate its buses, streetcars and then the subway line, it became a landlord along the way.

As a way of bringing additional revenue to the TTC, long-term leases were signed with tenants and many are still operating today. The current tenants include the Canadian Tire Office, the Cineplex Odeon Theatre and parking complex, and the Mandarin.

In addition to the tenants, the TTC owns the current staging area for Metrolinx and the bus bays that operate onto Duplex Avenue.

When the leases were negotiated, the Yonge subway had opened and operated from Union Station to Eglinton. Although there were some apartments in the area, it was not an employment hub, so the city leaders of the day likely used the 100-year lease to entice corporations to locate at a transit hub. Today, the land is some of the most valuable in the Greater Toronto Area and a significant redevelopment opportunity.

Although the TTC has collected $75 million in revenue, the rents are below market rates.

The leases are up for renewal in 2021, which is also when Metrolinx expects to complete the Eglinton Crosstown LRT. The timing creates an opportunity for the City of Toronto to consider these 10 acres and engage in some city building.

Various city agencies have attempted to sort out the long-term leases. Initially it was the Toronto Transit Commission, then Build Toronto and now a new city development corporation, CreateTO.

In 2016, Toronto City Council directed CreateTO to work with the tenants and come back to council with the cost of buying out the leases.

Two years later, Don Loggie, the lead for development at the new agency admitted there is not much to report. Although discussions are ongoing, tenants are not interested in terminating the current leases.

In spite of the development opportunity that exists, it is unlikely the city will be able to terminate these leases in the next three years,  except for one parcel that will be returned to the TTC in 2021 — the former bus terminal currently being used by Metrolinx in the construction of the Crosstown. Once the staging site is no longer required, it becomes surplus land.

The next opportunity won’t be until 2070 when all the leases expire.

The city may try to develop the smaller portion of the site, but doing so would miss out on a bigger opportunity. The air rights over the parcel have also been sold.

In light of the challenges, the city has an opportunity to completely rethink how that space should function for midtown. The land creates a perfect opportunity to add parkland to an area that is lacking in green space. It could also function as a civic square with urban art that draws people to the area.

When the leases are terminated in 2070, the city will have an opportunity to rethink the development potential. Between now and then the greatest use for the former bus terminal is a public space that offers a little respite from the construction that has dominated the area for the last 20 years.