Stintz on Midtown: Battle for the bus lands should be about maximizing green - TRNTO.com
Skip to content 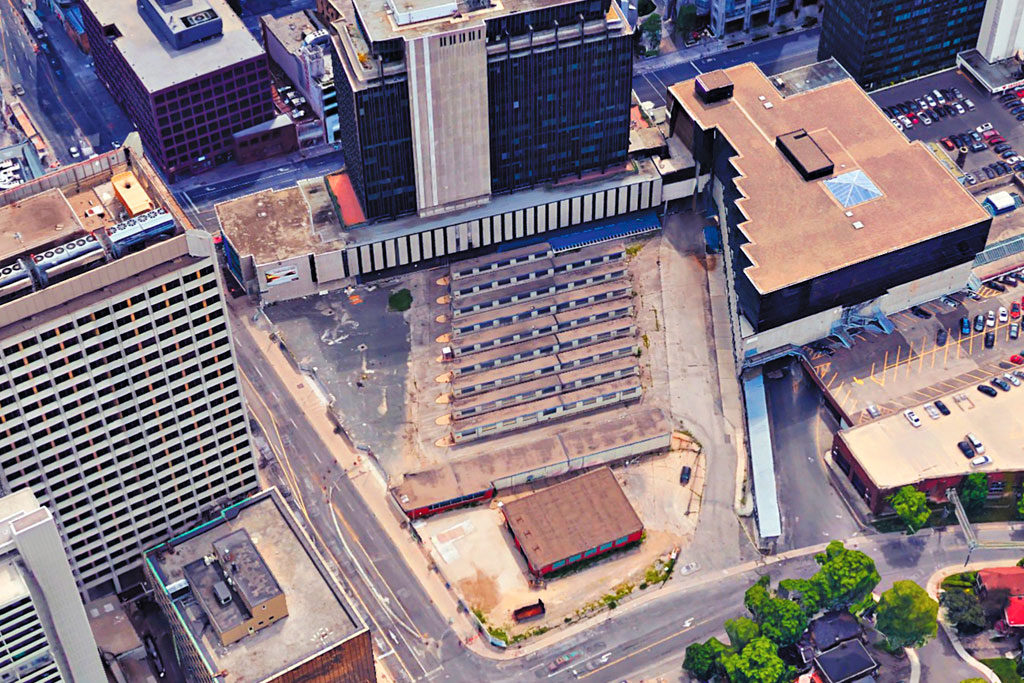 There was a time, not that long ago, when the highest building at Yonge and Eglinton was the shopping mall and office building at the northwest corner, with most other buildings in the area being between 13 and 20 storeys. Over the past 20 years, the area has changed rapidly as three of the four corners at Yonge and Eglinton have been redeveloped or are under development. The major area left to be developed is the TTC’s decommissioned bus terminal lands at Eglinton and Duplex.

Currently, the bus lands are an eyesore that most people in the area have learned to live with. Over the next few years, the area will be used by Metrolinx as a staging ground for the light rail transit (LRT) project that is currently under construction.

However, once the LRT line is operational and the large bus terminal is no longer needed by the TTC, the debate for how best to develop those lands will begin.

There are those that advocate for a large public park to accommodate the increased density in an area that is already deemed to be parks deficient.

The other side of the argument is that the lands should be fully developed so that the cash-strapped city can maximize the land value.

Like any good elected official, councillor Josh Matlow is trying to strike a balance. He recently released a drawing of how the site could be redeveloped, including a large portion of parkland and a higher building than what was originally envisioned for the site.

One of the more significant challenges in developing the area is the fractured ownership of the land. The TTC owns part of the land, and there is a separate owner for the other half and another for the air rights above the current bus terminal. At one point, the City of Toronto tried to consolidate the land holdings but was not successful.

Another challenge in developing the site is that different divisions in the city have different visions.

Coun. Matlow and the community want a significant green space. Build Toronto, the agency that was created to maximize the city’s real estate holdings, developed a plan that includes a hotel, mall and entertainment centre that would turn the area into an ongoing revenue generator.

The best opportunity for this piece of real estate is to make it the biggest, greenest park that can be built. The population of the area has exploded, and the local area growth is expected to increase further because the LRT along Eglinton is creating development opportunities along the corridor.  The area is already feeling the pressures of increased density.

The parks in the area are great, but more is needed. Every inch of Eglinton Park is used throughout the day. The next large park is Sherwood Park, but that park is also heavily used.

The city cannot afford to buy the land to make a park, but it can forgo revenue that would have been made developing this site.

The private sector is taking care of building condos. The city should focus on building much-needed green space.