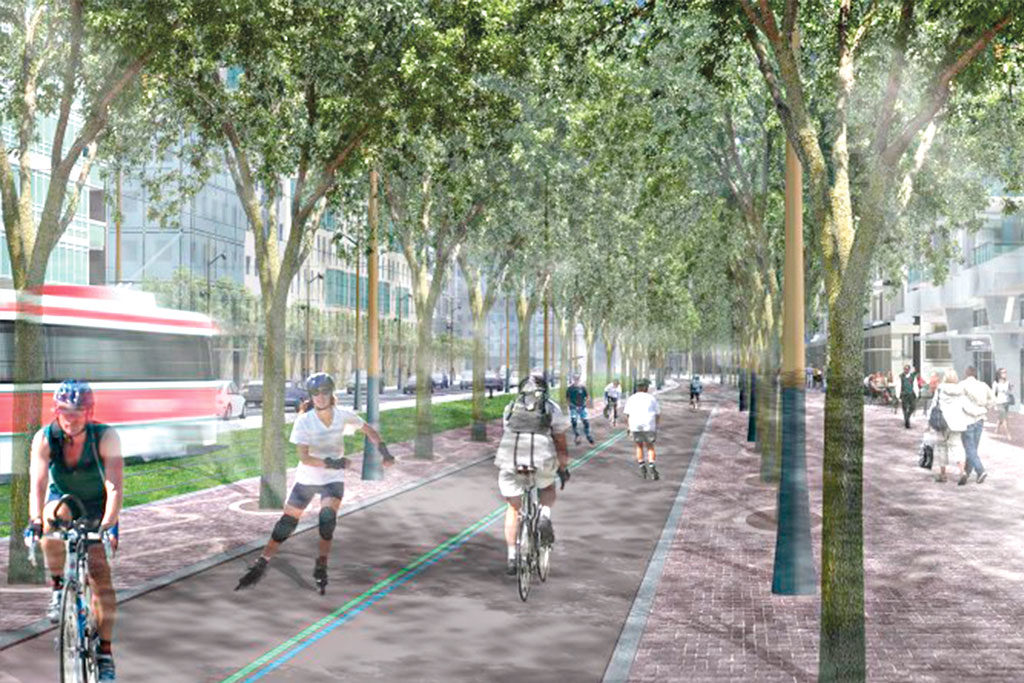 Toronto is emerging as one of the most vibrant cities in North America. The transformation has been led in part by the strategic decision to develop condominiums downtown and along major transit corridors, which has helped the city to avoid the hollowing out of its downtown that has threatened the viability of many American cities.

With the construction of the Eglinton Crosstown, Midtown will soon become the new downtown. Now is the time to redesign current infrastructure to complete streets that better serve all ages, abilities and modes of travel. Thanks to a new study, the city has a template for what works.

The Toronto Centre for Active Transportation partnered with the University of Toronto, Ryerson University and the Province of Ontario to study what happens when streets become more than what they were originally designed for — cars. The project studied the complete streets design approach in several municipalities.

The Toronto projects included are the bike lanes on Richmond and Adelaide, and the revitalization of Queen’s Quay.

The 3.3-kilometre bike lane on Richmond runs westbound with  a parallel bike lane running east on Adelaide, resulting in a complete bike route in the corridor with a cost of $780,000.

The project reported a 100 per cent increase in cycling traffic and a reduction in vehicular travel times. Pedestrians also reported an increase in their perception of safety. The bike lanes are separated from traffic using planter boxes and bollards, so cyclists don’t weave in and out of traffic and motorists are not caught by surprise when a cyclist pulls up beside them.

The $130 million Queen’s Quay project radically transformed the  the waterfront from Bay to west of Spadina. The project included new streetcar design, wide boulevards and improved cycling infrastructure. There has since been a 600 per cent increase in cycling, increased pedestrian traffic and a significant increase in retail activity and transit improvements.

Currently, there is very little cycling infrastructure in Midtown. Yonge is too narrow, and Eglinton is under construction. The sidewalks are also congested as the local population increases.

The good news is that the development in the area provides an opportunity to expand the sidewalks, improve boulevards and think about bike routes that encourage commuting.

The better news is that the community has been engaged with politicians, planners and the city on a plan to improve the streets and public spaces in Midtown. All we need now is just a little help from our local politicians.