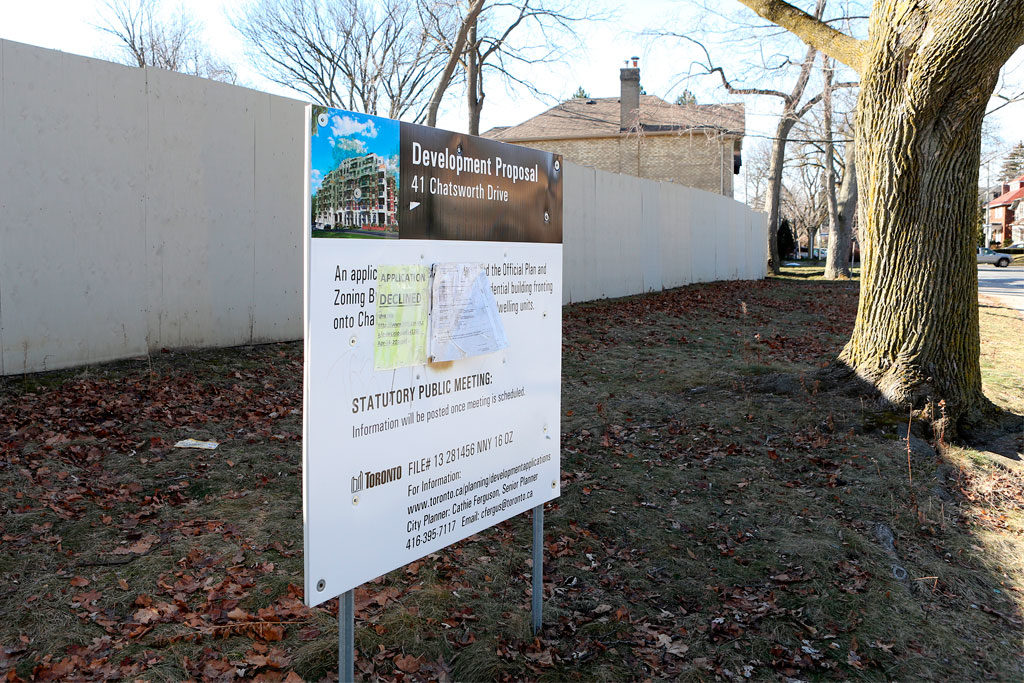 Ongoing construction at Yonge Street and Eglinton Avenue is now common. However, in light of two development applications filed just before the end of the year, it looks like there will be more activity at Yonge and Lawrence Avenue.

One of the applications is for a development at 41 Chatsworth Ave., the former site of a church. This is the second try by the developer to build condos on a neighbourhood street. The original application was denied by the Ontario Municipal Board. The summary of why the application was denied was succinct, and clearly outlined how applications need to be in keeping with the built form of the surrounding neighbourhood. The six-storey development was completely out of character with the surrounding properties, which are detached homes on wide lots.

The impertinence of the revised application is astounding in that the proposal completely ignores the spirit of the OMB ruling.

It is mind boggling why the developer figured that taking a floor off the top of the building would somehow be acceptable to the community and the City of Toronto. Either the developer did not read the OMB ruling or doesn’t particularly care. Although the application has been filed under a new developer, it turns out that it is the same developer with essentially the same plan. This is also the same developer that cut down trees next to a ravine without a permit on a Saturday morning.

If ever there was a fight worth having in north Toronto, it would be over this proposal.

The community is already gearing up for the fight. The residents organizing are far more knowledgeable about the process and have the resources to smack down this application, just like they did the last one.

In the meantime, the community should demand that Chatsworth remain a one-way westbound street from Yonge to Lawrence in order to prevent the developer from trying to turn it into a two-way street as they attempted to do in the last go-round.

The other application is for a 13-storey condo at 2908 Yonge Street, currently the site of a gas station. This plan is not as odious but is aggressive in height for the area.

North Toronto residents have witnessed much change over the past decade and are not NIMBYs. They are well versed in the development process and understand how to influence.

With an upcoming municipal election, residents are looking for leaders who understand how to build neighbourhoods.