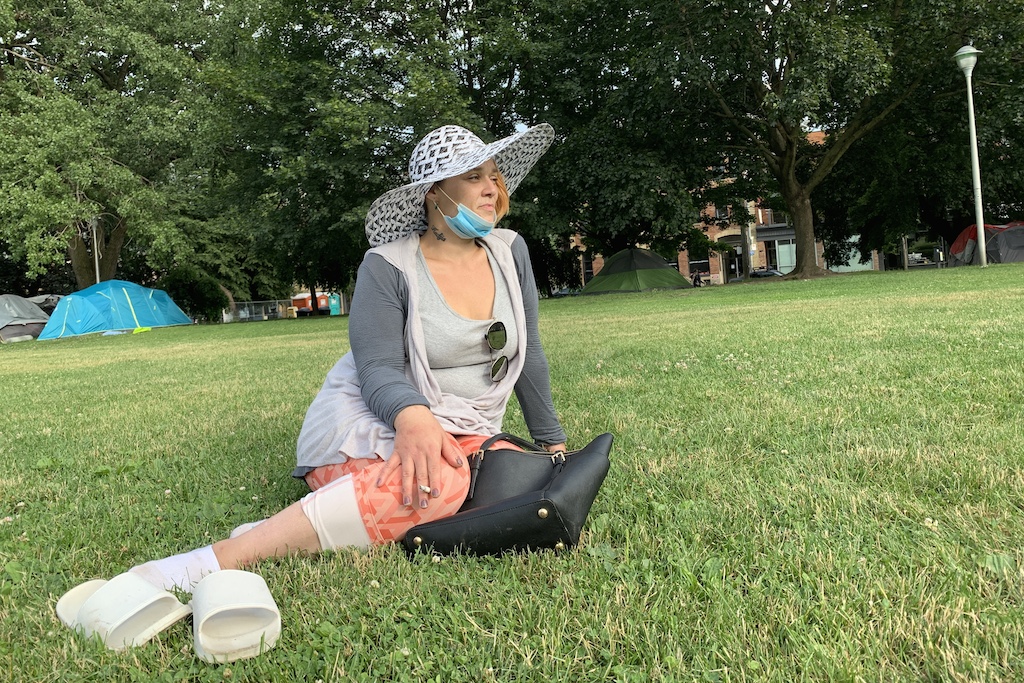 Sasha sits across from me in the grass at Moss Park, her wide-brimmed straw hat flopping in the hot summer breeze. She’s a friend to many in the community, a mother of three wonderful children, and a resident of the Moss Park encampment.

I caught up to her after she spoke at a recent press conference in Moss Park, organized by the Encampment Support Network (ESN) in coalition with residents of Toronto encampments.

“Last year, I was actually the first person to put up a tent here, and that’s how it basically started,” she says, explaining that she has been living on the streets on and off since she was 14. Sasha is now 31.

“I lost everything,” she says, explaining that she previously lived with her husband but the situation was not safe for her. “My house, my marriage, my kids, I’m on the relapse.”

She says that she’s disappointed with the reaction to the housing crisis, both from the City of Toronto and from individual residents of the area who show little regard for their neighbours experiencing homelessness.

“I used to think the world was a really bad place, but then I realized it’s not the world. It’s the people,” she says, explaining that the class divide in Toronto hurts her deeply. “It’s unfortunate because I’m on a different side and they’re on a different side, you know? There’s poor, middle class, and high class. A high-class person will just walk right by me, but a poor person will say hi to another poor person, and that’s unfortunate.”

“You’re no better than me. We bleed the same. We breathe the same air.”

Her piercing blue eyes welled up with tears, but she wants to continue the interview — people need to hear what she has to say. “There’s no difference between you and I, so why are you treating me like this?”

She says that the thought of seeing her kids, who are currently staying with her ex-husband’s mother, keeps her going. Her three children are six, seven, and 12 years old.

“That’s my saviour right there,” she says of her youngest son, “if I wouldn’t have found out I was pregnant with him, I probably wouldn’t even be here today. I’d be dead.”

Sasha explains that she’s struggling with her mental health, saying that she doesn’t even feel like she deserves to eat. She deals with addiction and does not feel safe living on the streets, but does not feel safe in the current City of Toronto housing options either.

Critics of encampments are quick to claim that the encampments cause crime and violence and that the residents are simply refusing adequate housing options offered by City of Toronto officials. The reality is much more complicated than that.

For one, homeless people may be an easy scapegoat for crime in the city, but the vulnerable populations living in encampments are just as likely to be victims of violence themselves. Sasha says that she doesn’t always feel safe living in the Moss Park encampment, saying that, “last year, I woke up in my tent with a gun held to my head.”

Still, she says that she feels safer being able to live near other people, explaining that if something happens to her, “they’ll come out running.”

She claims that although she was offered housing through Toronto’s Supportive Housing program, it was unsuitable; the former resident’s belongings were still in the unit when she was supposed to move in, it was in a state of disrepair, and there was a rodent infestation.

“It’s not a suitable place,” she says, continuing, “This is mental health and addiction housing. You’re making my mental health worse, first of all, and making me not want to be anywhere near there. I’m not an animal.”

Toronto Supportive Housing did not respond to TRNTO’s request for comment.

Sasha explains that she returned to the encampment at Moss Park because she felt safer there, although she doesn’t want to stay in the park forever. Instead, she wants safe, permanent housing options that will work with her.

She points out the number of empty apartment units in Toronto, questioning why those aren’t being filled with people, saying, “ten empty units, that’s ten people we could have off the streets.”

Another thing she wants to see changed is more safe injection sites and resources for people struggling with addiction. “These people save lives, you know what I’m saying? I’ve watched them myself. It has happened to me, you know, they brought me back alive.”

Sasha’s message to the City is, “Stop fighting us, and listen to us.” She hasn’t personally encountered anyone from the City in Moss Park, saying, “I just wish somebody from the city council would take a walk through here and see what’s really going on.”

As for her goals for the future, Sasha is still struggling to survive, but she hopes that she gets the support and housing that she needs to work on her mental health and sobriety. She wants a safe home and to be able to see her children.

She’s frustrated by policies that, in her opinion, don’t reflect people’s lived experiences, saying, “I just think that people in a better situation than we are can come to check out what’s going on down here, you know?”

Despite receiving upsetting personal news that day, Sasha was incredibly gracious and chose to advocate on behalf of others in similar situations. As we wrapped up our interview, she had one last thing to say to whoever is out there reading this article wanting to help.

“You can bring some warm blankets and pillows for those living here [in Moss Park].”