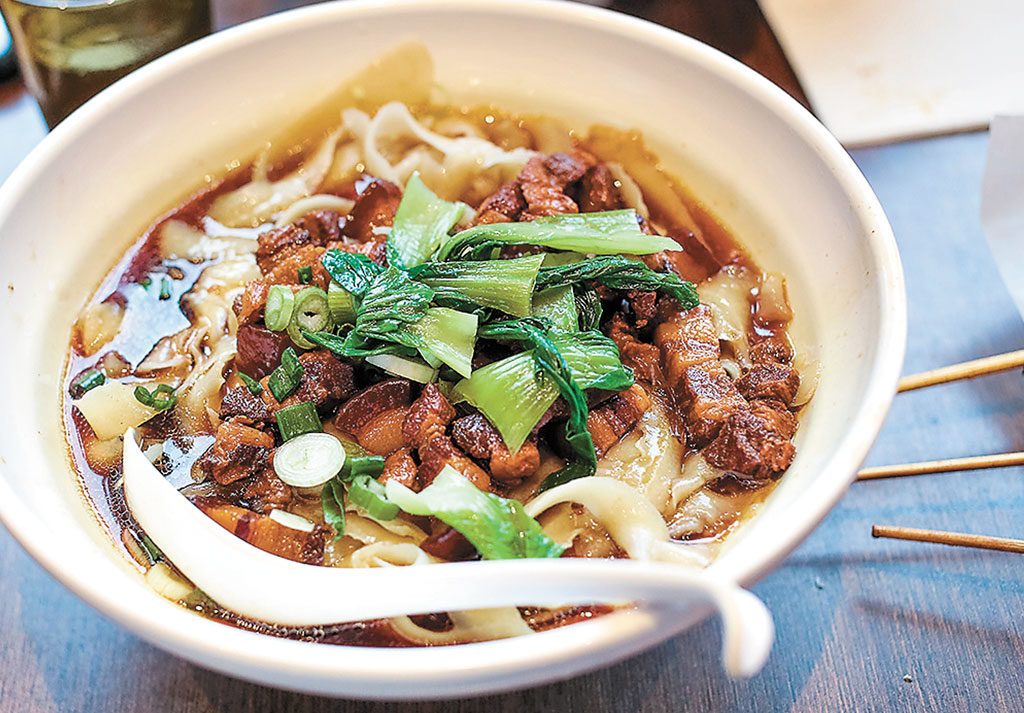 Scarborough recently made waves when it was hailed as the world’s best ethnic food suburb scene by American economist Tyler Cowen. Toronto’s urban sprawl has created a bounty of plazas, which host endless mom-and-pop food shops where everything from hot bowls of laksa to Uyghur-style lamb kebabs are within a quick drive of each other.

Magic Noodle is a 24-hour Chinese noodle shop that sits in a plaza at Midland and McNicoll. The restaurant opened in 2012 and specializes mainly in dry and wet noodle dishes. The first thing you’ll encounter on entering the small dining room is the sight and sounds of a noodle master slapping, stretching and folding fresh batches of dough next to a large pot of boiling water. All noodle dishes are freshly cut and sliced after you order.

Pulled vs. Sliced
The main attractions are the two types of noodles available: lamian and shaanxi. The former, also called pulled noodles, originate from the northwestern Chinese province of Gansu, where they are now synonymous with the capital, Lanzhou. The latter, sliced noodles, hail from Shaanxi province in the north and are also known as biang biang. The pulled noodles are similar to pho noodles: thin long strands (you can choose the thickness) cooked to al dente and served with richly flavoured stocks and meats. The biang biang noodles are pappardelle-like: roughly cut, they soak up more flavour than the other.

Best slurps
The hand-pulled noodle with braised beef brisket ($6.99) is one of the most flavourful bowls at the restaurant, served with green onions, bok choy and fatty pieces of meat. Another popular version is the roast duck and BBQ pork and, for the adventurous, there’s the haggis pick (both $7.99). Don’t leave without trying a bowl of sliced noodles with braised pork belly ($7.99), served in a pool of sauce topped with bok choy. If you prefer your noodles dry, there are fried options done every which way, from Szechuan style to shredded pork flavoured with fish (both $9.99).

More than just noodles
Magic Noodle also features a number of snack plates that are worth sharing as you slurp on your soup. The barbecued squid ($1.99) is a crowd favourite. Perfectly cooked whole tentacles are marinated in house sauce and served with sesame seeds. Also try the seasoned grilled lamb kebabs ($1.99) and the pork and leek steamed buns ($0.99).