Surf culture is erupting in T.O., far from the ocean | TRNTO.com
Skip to content 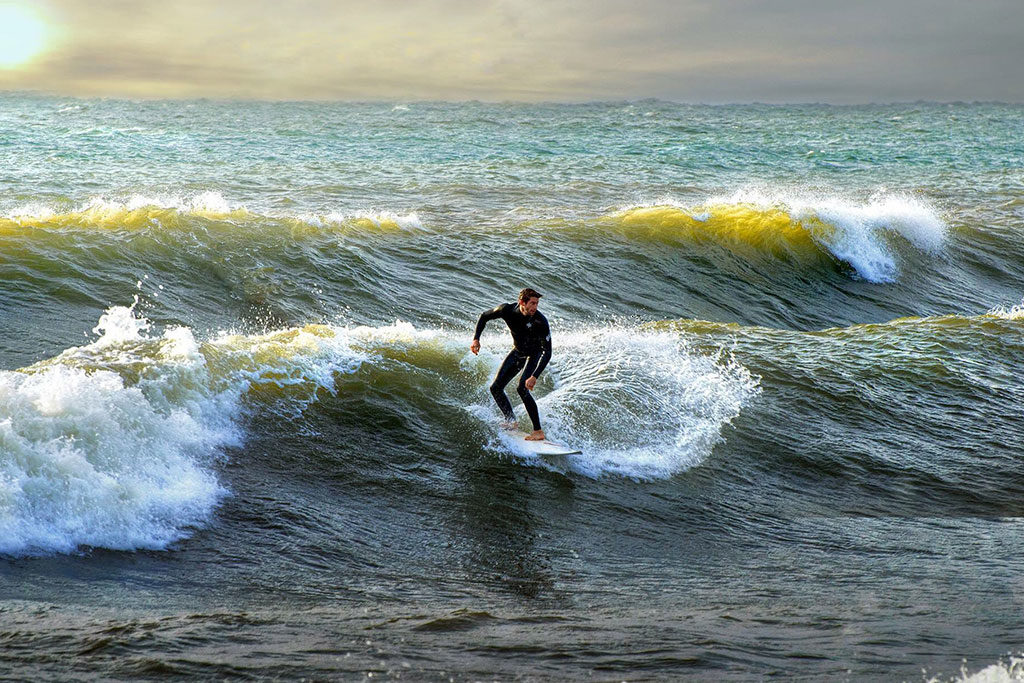 When one thinks of the top surfing destinations in the world, Hawaii, California and Australia come to mind. But it turns out Toronto’s got a surfing groove all its own, and it’s been a long time in the making.

From pro athletes and beginners just out to have some fun to surf shops with local and international gear and a surf music scene filled with local bands, Toronto’s surf scene could fool anyone into thinking this town is oceanside.

But ocean, there is not. Just a set of five big and beautiful lakes that break from time to time, providing surfers with the waves they need and surf fans with the right backdrop for their beachfront bonfires and boardshort fashion statements.

Those lakes are what allowed T.J. Atwood, Canadian Olympic surfing hopeful, to continue his passion when he settled down in Toronto five years ago after travelling the world and surfing competitively since his high school days.

Atwood’s wife introduced him to Surf Ontario shop owner Mike Sandusky, a man who has a bit of a reputation for pushing the sport of lake surfing to the forefront in T.O.

“We went to Lake Erie, and it was just Mike and myself. From that day forward, I just surfed all the time whenever there were waves on the lake,” says Atwood.

Now that surfing will be introduced to the Olympics in 2020, Atwood hopes to show the world that a lake surfer can win it all on the international stage.

He started a GoFundMe campaign to drum up support as he heads off to his first competition in Vancouver Island from May 3 to 7 on his road to the Olympics.

“It’s the start of the next two years for me, for training and surfing in different competitions around the world,” he says.

Atwood isn’t the only one that Sandusky has introduced to lake surfing. Since falling in love with the sport in Hawaii in 2001, Sandusky has been telling anyone that will listen that lake surfing is viable here.

“It’s cool because we can surf in the summer with board shorts and in the winter in super-thick wetsuits and boots and be covered in ice, and there’s everything in between. It can feel like Hawaii, it can feel like California, or it can feel like hard-core Canada,” says Sandusky.

Through his North York shop and his website, SurfOntario.ca, Sandusky has helped create a community of lake surfers in Toronto.

“When we have waves, everyone is excited and it’s a good vibe. We’re happy to be in the water together and sharing waves,” he says.

That community is growing. Sandusky says the guys he started surfing with 16 years ago are still in the water with him now, but the surfer population has doubled. That’s partly due to the rise of stand up paddle boarding as well.

“It’s opened up so many people’s eyes to lake surfing. They’ll get a paddle board and get on the lake, and sometimes there will be waves, and they’ll try it on their paddle board,” he says.

It’s not all about the sport though. Surf music is another aspect of surf culture that is also thriving in Toronto, thanks in part to Dano Villano and Pete Jones and their idea to start the Great Lakes Surf Battle. This year’s event is set for June 1 to 3 at the Cadillac Lounge. After 13 years, the shows continue to be packed with music lovers who gravitate toward surf music’s unique sound.

“Toronto really likes garage rock and roots rock, and surf music is kind of like that. It’s mostly instrumental, and it really gives people a lot of freedom to express themselves,” says Villano. “Just when I think it’s only these people, a new batch of people come out every year.”

So T.O. may not be attracting surfing tourists from across the globe yet, but for those in the know, the surf scene is alive, well and growing year by year. Whether you like to catch a wave, or just jam out to the tunes, there’s a little something for every surf lover in town.