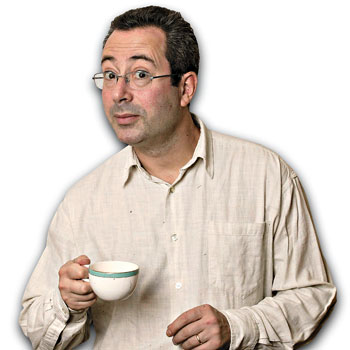 Q: If your life were made into a film, who would play you?

Keira Knightley, obviously. She has the bone structure.

Q: You’re not a big sports fan. Did that make writing this show more challenging?

Of course not. This musical is no more about soccer than South Pacific is about World War II, or Grease is about the American school system.

Q: What surprised you most about the staging in Winnipeg?

The temperature. My testicles disappeared when I got off the plane and did not re-emerge until May. Q: Why does the Elton-Webber formula work so well?

Two great imports for the price of one! But seriously, they are two of the greatest creative forces of their generation, and we are thrilled to be collaborating with them.

I don’t have one — it’s too hard to play a record on an iPod! I do enjoy listening to Tony Bennett, music from the Woodstock era and the scores of Andrew Lloyd Webber.

Q: Beckham or Ronaldo?   Beckham. I like who my wife tells me to.

Q: As a certified pilot, where would you like to fly to right  now?

I am indeed a single-engine, fixed-wing pilot. I’d fly to Newfoundland, my son, my son. My mother was born there, and the people are truly wonderful, honest and unique.

Q: What were the challenges for this role?

This is one of the loveliest and easiest roles I’ve ever performed. It was beautifully and thoughtfully written by Ben, which made it a delight to rehearse. Sometimes the gods of theatre smile upon us. Q: How did you master the Irish accent, m’boy?

I YouTubed as many Lucky Charms commercials as I could find.

Q: What’re the trickiest words to say in that R-rolling tongue?

Erica Peck’s character’s name, Mary McGuire, is not a walk in the park. As you can imagine, I say it a fair bit.

Q: You’re not much of a footballer, true?

True, but my ”air soccer” skills are honed! I hope to see some TFC with the cast.