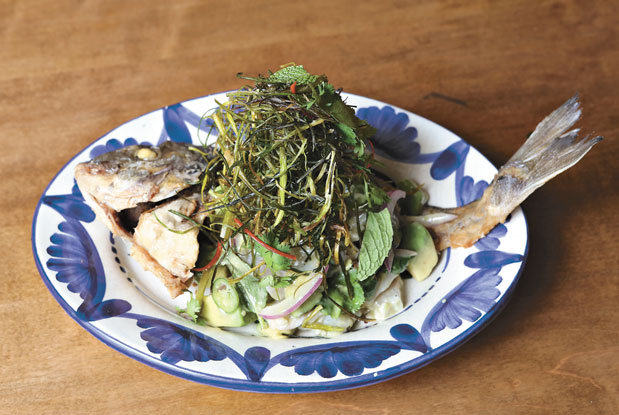 If Grant van Gameren were a one-trick pony, you would not be reading this column. Because he would have opened son of The Black Hoof, and why bother with that? After Grant, who was its founding chef, left the Hoof in 2011, he ate his way around Europe, finding most felicity in the tapas of Spain.

The food of Spain is adored for its sharp flavours and fealty to fresh ingredients. No wonder Grant fell in love. Everybody thinks he’s just a snazzy salami guy, but we who fell under his spell at the Hoof recall spectacular flavour and graceful garnishes.

To open Bar Isabel, he assembled quite the team. He scooped chef Brandon Olsen from the Hoof, for front-of-the-house, added the suave Guy Rawlings (ex-Lucien) and partnered with Max Rimaldi (Enoteca Sociale, Pizzeria Libretto).

I’m pretty sure that about 25 years ago I reviewed a mediocre Italian restaurant called Regina where Isabel sits. And that it was dark, with a bar at the front, served soggy spaghetti and had dark wooden arches and fake Tiffany lamps in the dining room. Which it does today. Are we seeing the bones of the old Regina? Not exactly a great look.

But they’re playing great music, from classic rock to New Orleans jazz; the servers are affable and educated; and the food is: Grant! Via Spain. It’s a flamenco on the taste buds.

One could drink wine, but why bother when there are bourbon confections that go down like a wet dream. The house signature cocktail is the Isabel Fashioned — bourbon with Grant’s bacon-infused sugar. For a palate teaser he offers pickled piquillo and jalapeno peppers with white anchovies and house-fried corn chips. Being Grant, he pickled the peppers himself and they’re vinegary heaven.

Chef allowed himself one shout-out to his Hoof days: tongue! A pile of shaved tongue sits between slices of toasted brioche. Grant brined the tongue by piercing it repeatedly with a syringe — for light pickling — and cooked it sous vide for 30 hours. If something as downscale as tongue can become haute cuisine, this is it.

But you must order the whole fish sea bream ceviche. The method is dazzling: Chef takes apart the fish, ceviche’s the chunks and puts it back together to resemble a whole fish, with cilantro, mint, avocado and frizzled leeks.

For dessert the gateau basque is mind-blowing, sugary vanilla cake, superbly moist, with a creamy heart. When the waiter pours sherried cream on top, it’s enough to imagine yourself eating tapas in Barcelona, doing after-work bonhomie with a gentle alcoholic buzz and snacks that dance a jig on the taste buds.

Joanne Kates trained at the Ecole Cordon Bleu de Cuisine in Paris. She has written articles for numerous publications, including the New York Times, Maclean’s and Chatelaine, and she was the Globe and Mail’s restaurant critic for 38 years.