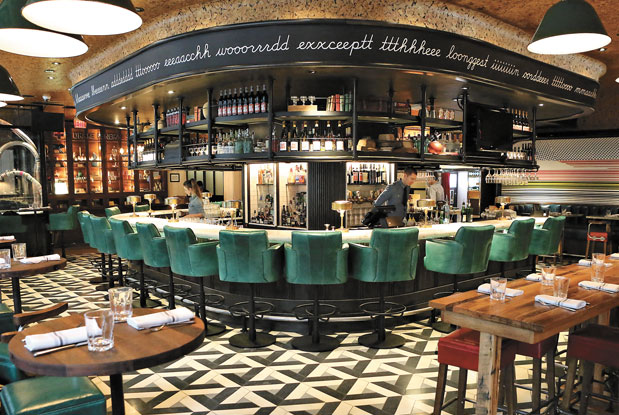 There are people in this world who like their food with the volume turned up. Maybe their marriage sucks. Or they’re on a really boring date. Or they’re out with an old friend out of obligation and there’s nothing left to say. Diners in any of these situations might really enjoy dinner at the Drake Hotel’s new extension of its brand (as they say on their website). Art meets commerce in the financial district, where the new Drake One Fifty is already doing very well, thank you, with 30-somethings 12 deep at the swanky marble bar.

The place is so loud that conversation is impossible. The dining room, which flows seamlessly from the bar, is charming to look at — a tasteful gut job on an old bank building, with high ceilings, clever wood accents garnished with art. Six thousand square feet with a capacity of 180 people is a wild horse to tame; hiring Teddy Corrado, who was chef at the delicious high-end failure C5 at the ROM, was clearly the plan for putting the bums in the chairs after cocktail hour.

Because it’s lousy. Not mediocre. Lousy.

Cod vichyssoise is an entertaining idea with blah flavour. So-called charred octopus is cotton-ball texture with no char. It comes with nice beans in light vinaigrette, lightly sweet pickled Peruvian peppers and sunchokes, but no vegetable pleasures mitigate such unfortunate octopus.

They do a good burger, although I would have liked to be asked how I wanted it cooked. And the fries are weird. One assumes that Teddy Corrado would walk on hot coals before he’d use a frozen French fry, but these frites have an unfortunate soft mealy texture. Uh oh.

Lobster pizza comes with the trendy new sidearm — sharp retro scissors. Which help cut it but the taste doesn’t: Cut it. Ordinary tomato sauce and carefully cooked small chunks of lobster do not an exciting night make. As for the crust: Meh. The dining room thins out at 7:30, but the bar is still going strong — because this is the IT place — a bar where you can eat — badly.