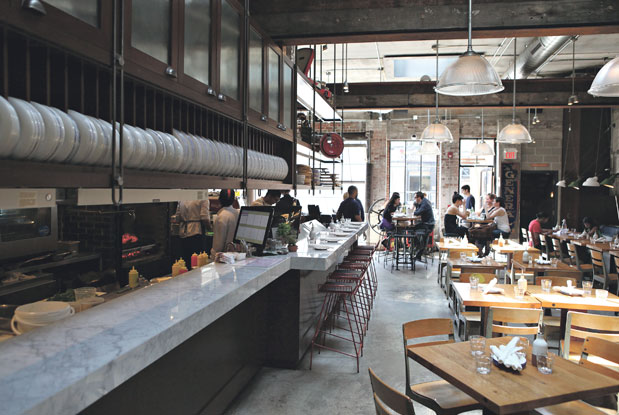 I don’t think Conrad Black is dining at Gusto 101. For one thing, they don’t take reservations after 6 p.m., and for another, His Lordship might not like the noise. It might remind him too much of where he spent his last couple of years. Oh, and for another thing, most of the good stuff at Gusto is pretty high carb, and Lord Black is apparently trying to lose weight after all the carbs he ate you-know-where.

Gusto has captured a fat slice of T.O.’s celeb dining scene, which may partly explain the plethora of very straight blond hair and big boobs. There is a constant stream of good-looking, nice-smelling people arriving. It’s walk-ins only after that.

First we try for a seat at the bar. It’s full. So we ask the person at the front (who may or may not be a maître d’) for a seat at a table. She says: “First come, first served.” We inquire as to how she knows, in the arriving crush, who came first. “Aah,” she says. That’s really helpful. We ask again. She responds similarly. We then say: “So it’s the law of the jungle?” She says yes. Now we get it.

Maybe Lord Black will be dining here. It is, after all, a très chic space, a recovering garage with its concrete floor intact, glass garage doors and big skylights letting in the light; lots of brick and a bustling open kitchen. By 7 p.m. they’re lining up outside to line up inside, and we consider ourselves fortunate and special to have scored two seats at a high-top with almost backless chairs.

The pizza is passable, with almost crisp crust and good toppings (salsicce is best, with plump roasted peppers and good fresh mozzarella). Pastas are similarly ordinary: ravioli of ricotta and spinach are flatter and harder than one would hope and awash in too much tomato sauce. Spaghetti alla vongole (clams) has great house-made noodles with fine light prosciutto-tinged cream, but the clams could make a Venetian jump into the canal: they are heinously overcooked and tough. And why cold, raw cherry tomatoes?

As for brick chicken, another Italian classic, if there was a brick involved here, it was a light one. The chicken does not appear pressed. It’s pleasant but ordinary (a Bubby-style roast chicken with a few sweet spices) served with deep-fried potato wedges and spinach leaves. The charred octopus antipasto is similarly afflicted: it’s dry, served with a big pile of olive paste and a sauce that recalls Tropicana OJ.

There are two bad desserts and one yummy confection. Skip the rather firm hazelnut bun. Do not succumb to chocolate cupcake, an almost rum baba with a squiggle of fake cream flavoured with unidentified artificial flavour. But splurge the calories on what they call crème brûlée, which is really s’mores gone pudding: a blend of marshmallows with chocolate and graham crackers, a fun mishmash indeed and not too sweet.

But let’s not get too excited. Really, there are two things Gusto does well: they have a kick-ass kale salad spiked with lemon juice, toasted pine nuts and shaved pecorino; and they really know how to bring out the beautiful people. Especially now that the rooftop patio is open.

Looking for a hot summer scene? This is it.