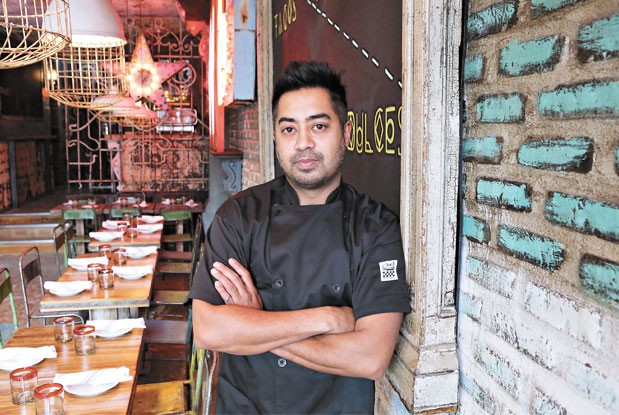 It was the spring of 2011, a time that Toronto food types could refer to as the pre–Grand Electric era. Back then, tacos had not yet become the city’s collective obsession, and going out for Mexican food usually meant eating mediocre Tex-Mex or hanging out at some too-authentic mom-and-pop shop. Toronto entrepreneur Dave Sidhu — 35 years old at the time — had just pulled out as a co-owner of Chimichanga, a now-defunct chain of Mexican restaurants. Financially, he was a wreck. His only asset was his condo, which he managed to refinance to gain $20,000. That paltry sum was his last chance at making a name for himself.

Sidhu had previously spent time living in New York City, where he worked at a couple of lively Mexican restaurants: Mexican Radio and the original Dos Camino on Park Avenue. He knew that Toronto needed something similar. Though Chimichanga served mostly unremarkable Tex-Mex, Sidhu had a vision for a more authentic taqueria (corn tortillas, made-from-scratch food) combined with a hip, raucous atmosphere.

“There wasn’t even time to be nervous,” Sidhu says. “I was so determined to do it on my own terms and to control my own destiny.”

Sidhu spent his entire $20,000 on the new concept. He filled the space with what is now a cookie-cutter restaurant set-up: reclaimed wood, antiques, exposed brick, chalkboard menus. He arranged a pay-back-later deal with his landlord and, unable to afford an apartment for himself, he took up residence in the burgeoning restaurant’s basement (where he would end up living for a total of 13 months). In five frenzied weeks, he built a restaurant. You may have heard of it: Playa Cabana.

In those early days, Sidhu manned the kitchen himself. He tossed together a staff of three other people — a bartender and two servers — whom he asked to work for free for two weeks, promising a trip to Mexico at the end of the year (a promise that he kept).

He served beer-battered fish tacos stuffed with cabbage, guacamole and chili-infused tartar sauce; buckets of sautéed shrimp tossed in blackened arbol chilis; mole-braised short rib tacos with Oaxacan cheese. He branded the place as an authentic Mexican restaurant where everything — everything — was made from scratch using fresh, local and seasonal ingredients. The music was loud, and the tequila list was long. It was an instant hit.

“It was wild,” says Sidhu, who took no salary for the first year and worked nearly non-stop. “I remember not even feeling tired.”

The timing could not have been better. Playa Cabana opened its doors right at the cusp of a Mexican food revolution in Toronto, spearheaded by the likes of Grand Electric, La Carnita and, of course, Playa Cabana.

A little over two years later, Playa Cabana is a veritable empire. In late November, Sidhu opened his fourth location: Barrio Coreano, an Korean-influenced version of Playa Cabana in Koreatown where tacos come with gochujang-marinated beef or Korean fried chicken. Before that, he opened the sizable Playa Cabana Hacienda at Dupont and Avenue, and before that, Playa Cabana Cantina in the Junction.

Sidhu now employs around 250 people, and his restaurants bring in millions of dollars in sales per year. He’s not planning on slowing down any time soon.

“He’s kind of crazy,” says Don, younger by three minutes. “If you tell him he can’t do something, he won’t believe you. He’s one of those guys who will sacrifice everything for the end goal.”

The two brothers were born in Miami to a Filipina mother and an Indian father. When they were four months old, their father abandoned them (he’s only been in touch once, when they were 18, speaking on the phone briefly). Shortly after that, their single mother took the boys and their older sister to Toronto. They were raised near the Annex.

Growing up, the elder Sidhu was a bit of a troublemaker, but he was also a talented basketball player (point guard). He demonstrated an entrepreneurial spirit at a young age, selling comic books at the age of 12. In his 20s, he was an aspiring filmmaker, working odd serving jobs on the side to pay his bills. (His original reason for heading to NYC was to make it in the film world.)

Despite his current successes, Sidhu’s time at the top hasn’t been devoid of controversy. In May of this year, the Globe and Mail gave the Playa Cabana restaurants a scathing review, wherein critic Chris Nuttall-Smith said he was “mystified by their popularity.” The tacos, he said, “are fine, if you’ve never eaten great tacos.”

Nuttall-Smith’s biggest qualm was with Playa Cabana’s claims of sourcing its ingredients on a local, seasonal basis. In reviewing Playa Cabana Cantina, he observed a delivery person from Sysco hauling in boxed oxtail, frozen octopus and other supplies. (Sysco is a massive food distribution company that is about as far from artisanal as a restaurant supplier can get.)

“It was probably my all-time low,” Sidhu says of the review. “Every point that he made was right.”

In response, Sidhu says he’s made changes: “Our ordering from Sysco has come down; we’re dealing with specialty butcher shops” he says, “but we’ve still got a long way to go.”

Still, if the crowds and the mini chain’s continued expansion are any indication, Playa Cabana is strong enough to withstand a bit of bad press. The restaurants are a raging party nearly every night of the week, but Sidhu’s trying to not let it go to his head.