Take a bow, tie a knot | TRNTO.com
Skip to content 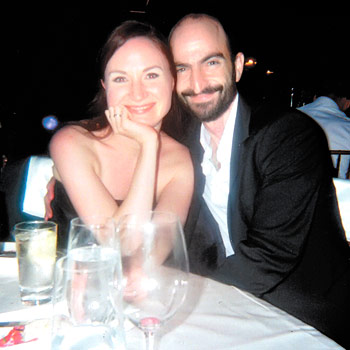 THREE YEARS AGO this month, accomplished playwright Adam Pettle and stage darling Patricia Fagan were married in Toronto’s City Hall before an audience of three.These days they’ve been drawing larger crowds to the Young Centre for the Performing Arts, with Patricia starring in Adam’s stage adaptation of Parfumerie — a romantic comedy set during the holiday season.

In August 1994,when I [Adam] was 21, I was diagnosed with advanced papillary thyroid cancer. While in treatment, I fantasized about meeting a young female cancer patient and of this great, tragic love affair we’d have. I never met her, so I made her up. The result was a short two-handed play. A love story set in the Princess Margaret Hospital.

In 2002, Factory Theatre chose to mount the play. Kristen Thomson recommended a phenomenal young actress named Patricia Fagan to play the lead role. And the rest, as they say, is wonderful history. Oh, and I am now cancer-free, phoot phoot!

Because the play was a two-hander, it meant that Adam and I were the only two people at the opening night after party. So I guess you could say that was our first date.

We sat in the Paddock on Queen and Bathurst, slamming vodka sodas and talking about how happy we were to have become such good “friends” during rehearsals. But let’s just say, it was loaded with subtext. After many a drink, I leaned across the table and gave Adam a sloppy kiss.

I [Adam] was just coming off a commercial run of my play Zadie’s Shoes at the Winter Garden Theatre and so, for the first time in my twentysomething life, was rolling in it. There were cab rides and fancy meals, shopping sprees and a whole lot of laughs. We laughed our way right through that money, but man, was it ever fun!

Four years into our relationship Adam takes me for another dinner at the Paddock. On the way home he nervously deeks into a corner store,grabs a pint of strawberries and says we need to cut through Trinity Bellwoods Park.

He stops at a baseball diamond (now I really know that something’s up — baseball is Adam’s religion) and he drops down on one knee to the hoots and hollers of grungy young hipsters nearby.

The strawberries were to go with a bottle of champagne he’d carried with him in his backpack.

It was in December of 2006 at City Hall. A total of five people, including us, were in attendance.

Trish’s dress was a vintage steal from Kensington Market. She looked unbelievably gorgeous and did a boom-box-accompanied walk down the “aisle,”which was basically from the bathroom to the signing desk.

We wrote our own vows, went for dinner at La Palette on Augusta and spent the night at the Four Seasons.

Our lives haven’t changed that much since we’ve been married, which is a good thing.

Trish is still acting in plays and I’m still scribbling.We have an amazing group of shared friends who we love to hang out with.

If reading the paper in bed on a Sunday morning while sipping lattes and eating croissants is worth mentioning, then we also do that.

Well, we’re getting ready to be parents now so a lot of our goals are about creating and maintaining a loving,stable environment to bring a new little person into.

Look for what’s funny and find somebody who genuinely wants you to be happy.

Secret of success as a couple We’ll let you know in 50 years!