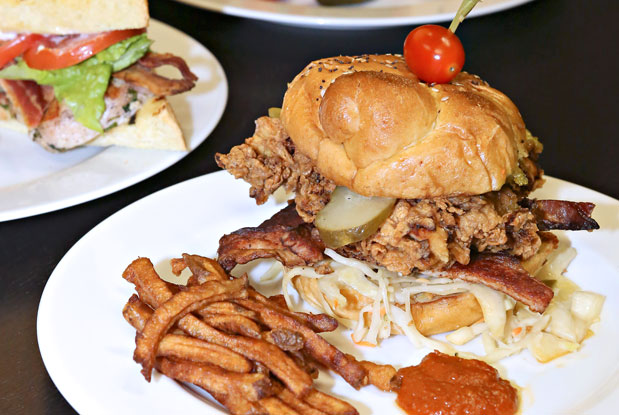 The mightly club is a classic sandwich which can be served every which way — from a triple decker to an Italian-style panini. This month, chef Grant van Gameren tells us which club knocks his socks off.

WINNER:
ROSE AND SONS, 176 Dupont St., $16
Chef has a keen eye: “Is this from Rose and Sons?” he questions. “This has so much flavour — it’s absolutely delicious.” The slaw and pickle give it some “nice sourness,” though chef passes on the homemade ketchup (“I’m a purist”). “Traditional isn’t always better. I’ll take this one home!”

CLASSIC CLUB
THE ROSEDALE DINER, 1164 Yonge St., $14
This sandwich tastes more like a classic club, van Gameren observes. Though the chicken is a tad dry, he loves the pile of bacon and finds the tomato and lettuce to be particularly fresh. “It’s pretty tasty.”

VOODOO SPICES
MARLOWE, 155 York Blvd., #1, $12.95
“I do like the charry flavour of the chicken and the panini-press bread style,” chef says. However, it’s still missing an element of freshness — despite being a non-traditional take on the ’wich.

SLICE OF FRANCE
THE RUSHTON, 740 St. Clair Ave. W., $12
Though chef notes that baguettes aren’t usually used in clubs, this one is deemed delicious — though admittedly trickier to eat. Van Gameren loves the avocado component and finds the chicken to be super-moist.

BITE OF THE BOOT
FABBRICA, 49 Karl Frasher Rd., $18 with soup
“I’m digging the prosciutto for sure — it’s clearly an Italian-inspired rendition,” chef says. He’s a big fan of the grilled chicken and the “big tasty tomatoes,” which include those of the yellow variety.

TRIPLE TAKE
THE LAKEVIEW, 1132 Dundas St. W., $12.50
Chef appreciates that it’s a triple decker. “It has this schnitzel-like chicken, which is interesting,” he notes. The amount of bacon pleases, and chef appreciates both the zesty mayo and avocado.

PULLED PERFECTION
SANDOOZLES, 709 Mount Pleasant Rd., $7
“We’ve got some nice spiced chicken here — pretty cool,” notes chef. He is also jazzed about the toasted white bread, though there could be a touch more bacon to balance out the mound of chicken.

REFRESHER COURSE
PICKLE BARREL,  6508 Yonge St., $11.99
“This is one of the more refreshing ones,” chef says. Van Gameren falls hard for the onion bun.