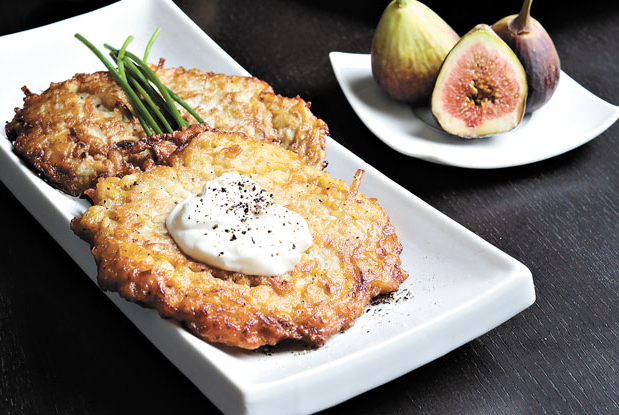 Whether you call it a hash brown, a boxty or a rösti, many cultures have their own version of a potato pancake. This month, we celebrate the ubiquitous staple as chef Grant van Gameren samples the city’s best latke for Chanukah.

WINNER:
DAITER’S FRESH MARKET, 3535 Bathurst St., $1.99
Chef is immediately taken with this latke. It is the most authentic in appearance, and there’s an audible crunch when it’s bitten into. “This one has a really nice exterior,” he notes. Props are given to the shoestring potatoes and the onion component.

Capital crust
YITZ’S DELICATESSEN, 346 Eglinton Ave. W., $6.95
This is some serious business here,” van Gameren says. Chef enjoys the latke’s crispy crust and finds the flavour quite pleasant; however, its puffed-up shape loses it some points.

Marvellous moisture
CAPLANSKY’S DELICATESSEN, 356 College St., $7.95
Chef finds this one quite appetizing in appearance, applauding the visible chunks of potato. The moisture levels impress: “It’s nice and moist. When you’re dealing with flour and potato, you want to make sure it’s not too dry.”

Grand globes
PICKLE BARREL, 5941 Leslie St., $2.99
These spheres pack visual impact: “They look really cool, really fun. ‘A’ for effort on presentation.” The centre could be improved with a finer filling.

The mothership
CENTRE STREET DELI, 1136 Centre St., $1.60
“This is a big latke — it’s the mother of all latkes!” Unfortunately for chef, what the round has in looks, it lacks in salt and flavour. Pointing out the crust’s aeration, chef notes that it’s probably got the best crispy crust of the bunch.

Stellar centre
STEELES DELI, 180 Steeles Ave. W., $5.99
“These are very simple ingredients here, and you kinda lose that simplicity when you over-fry,” chef notes. Despite being over-fried, the latke’s centre is nice and moist.

Superior spices
UNITED BAKERS, 506 Lawrence Ave. W., $2.49
“This one has a really nice spice mixture to it,” chef says. The spices pair well with the applesauce. This latke also gets points for its chewy texture.

First-class sides
FREE TIMES CAFE, 320 College St., $7.95
“They’re a little bit dense,” chef says. However, the quality of the sides excites: “The applesauce has those really nice winter spices in there.”