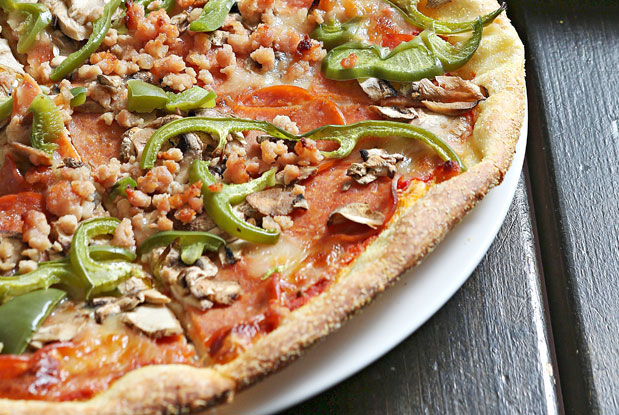 Everyone loves to talk artisanal pizza, but sometimes, a night in with some delivery ’za is where it’s at. Chef Grant van Gameren tells us which delivery goods check all his boxes.

WINNER:
CLASSICO LOUIE’S, 2549 Yonge St., $13.60
Chef is instantly taken with this pick, noting the crispy pepperoni and the thin crust, which folds nicely. “It’s got this nice semolina on the dough, which is something we do at the restaurant. It’s more artisanal.”

Salami success
DANTE’S, 8707 Dufferin St., $21.99
Van Gameren comments that he likes a light saucing, and unfortunately, this ’za is a bit heavy-handed with it. He would prefer fewer toppings, too, though commends the inclusion of salami instead of pepperoni.

Old-school Italiano
MIMI GOURMET BY CAMARRA’S, 8700 Dufferin St., Unit #18, $21.35
Chef instantly points out the classic dried herbs dotting the top of the pie. “This is pretty, old-school Italian stuff.” But the lack of crust makes the pizza lose points.

Terrific toppings
ABRUZZO PIZZA, 9010 Yonge St., $14
“The quality of toppings is great,” chef notes. “I like that the green peppers are nice and small, and they’re using real bacon.” The crust is properly crispy to boot, and overall, this pie is a strong contender.

Cheesy choice
BOCCONE, 1378 Yonge St., $18.25
“This looks like your traditional takeout pizza,” chef says, pointing out the cheese caramelized on the crust. For him personally, the cheese overwhelms slightly, but for a late-night pick, it’ll do the trick.

Veggie love
BROOKLYN PIZZA, 3016 Bathurst St., $14
Although van Gameren enjoys the tomato sauce, he finds that the crust crumbles too much and has more in common with a cracker than it should. As the only vegetarian pick, chef notes that he has a lot of love for vegetarians, but a nice dough would up its standing.

Quality sauce
MEZZA NOTTE, 5304 Yonge St., $16.50
Chef is taken with the tomato sauce on this number. “The seasonings are not cheap or synthetic,” he points out. White onions pepper the ’za, and chef notes his preference for them over red onion. “I really like the flavour profile.”

Pepperoni party
FRANK’S PIZZA HOUSE, 1352 St. Clair Ave. W., $15.50
“There’s nice pepperoni on this one — they’re not skimping out, and it’s really nice and crispy.” However, chef would prefer it if the cheese were underneath everything, caramelizing not steaming the veggies.