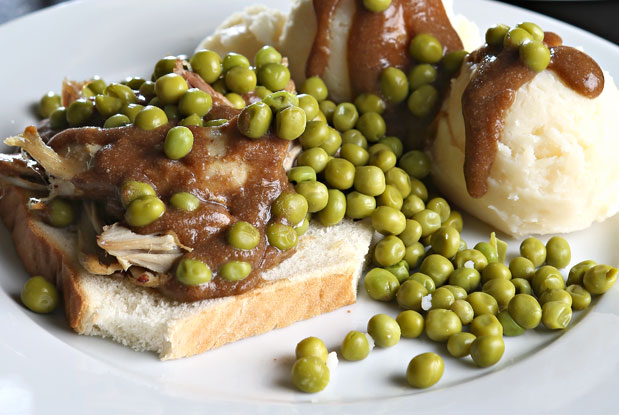 There is no better way to get yourself revved up for Thanksgiving than with an old-fashioned hot turkey sandwich. Chef Grant van Gameren tells us which Toronto throwback diner is on the gravy train.

Good Bite, 2463 Yonge St., $10.95
“I do like me some mashed potatoes,” van Gameren notes. Initially skeptical of the overcooked peas, chef reconsiders, finding them to be rather comforting. As for the turkey, chef likes the mix of white and dark meat. “This is really good — it’s bringing back a lot of memories with the flavour profile.”

Cranberry cravings
Windfield’s, 801 York Mills Rd., $12.45
Unfortunately, this dinner doesn’t knock chef’s socks off. The turkey is a tad too dry for his liking; however, he does enjoy the addition of the cranberry sauce.

Groovy gravy
Steve’s Restaurant, 3788 Bathurst St., $12.99
“This gravy is definitely the best so far,” chef notes, finding it really flavourful. Had the dish included an acidic component — like cranberry sauce — it would’ve improved its standing.

Terrific turkey
Fran’s Restaurant, 20 College St., $11.99
“I like the strands of the turkey,” chef says, noting that it’s got a really nice turkey flavour. While the cranberry sauce impresses with its whole berries, the dinner loses points with the bread crusts, which stand out too much. “I’m more of a crustless guy when it comes to this.”

Crustless contender
Mars Diner, 2363 Yonge St., $14.95
Crust-wise, this pick fares better: “I like the fact that the crust is removed,” van Gameren notes. Mars gets points for its thin gravy and for using both dark and light meat, making the meal one of chef’s favourites.

Green bean gusto
Leonard’s Family Restaurant, 220 Laird Dr., $11.95
Initially turned off by the green beans, chef ruminates and decides he likes them after all. The turkey, however, is lacking in moisture, though chef gives the eatery props for including cranberry sauce.

Twist on tradition
Wimpy’s Diner, 8123 Yonge St., $12.99
“This is more of a non-traditional one — more like a turkey ham,” chef says. The result? More flavour, though, for chef, it doesn’t scream authenticity. He’d also prefer his peas to be, yes, overcooked.

Mashing mavens
Chew Chew’s Diner, 186 Carlton St., $11.99
“Their mashed potatoes are really good,” notes van Gameren, impressed with the seasoning. He also likes the mix of dark and light meat but, again, finds the crust to be a bit much. Overall, this pick is a top contender.