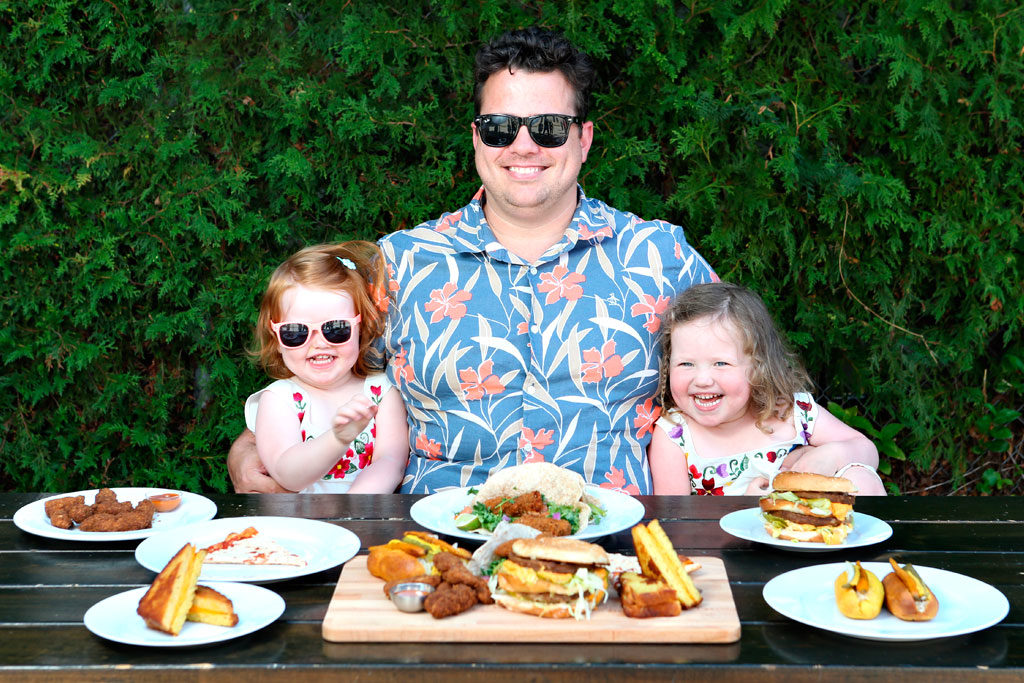 Are you and your family ready to go meat-free? We had chef Victor Barry of Piano Piano and the new restaurant Cancan — along with his two daughters, Sofie, age two, (left) and Charlotte, age three — sample the best kid-friendly vegan food from around Toronto. Which one tickled the toddlers’ taste buds? Read on.

Mac attack
Doomie’s, 1263 Queen St. W., $16
“OK, that’s trashy and delicious,” Victor says, slightly embarrassed at how much he enjoys this vegan burger. “It’s better than a Big Mac.” After declaring this option his favourite, his daughters follow suit. “But I can’t eat a whole one,” Charlotte laments.

It’s been a slice
Pizza Del Arte, 1480 Bathurst St., $9 for medium
“I want pizza!” Charlotte says, excited to tuck into this vegan slice. Charlotte laughs after biting into it, but Victor is skeptical. “With a vegan pizza, why use cheese?” he wonders. “There are so many things you can put on pizza.”

Hot diggity dog
Planta, 1221 Bay St., $17.50
“This is a really cool idea,” Victor says of Planta’s vegan hot dog, which uses a baby carrot in the place of a frankfurter. “It’s very reminiscent of a ballpark hot dog.” Charlotte holds out a piece of the pickle to share with her dad. “It’s good, right?” she says.

Flour power
Fresh, 90 Eglinton Ave. E., $10
“I like a good flour tortilla,” Victor says. “But why is the squash deep-fried? Why is the kale not dressed?” He’s disappointed that this vegan taco with jalapeno and lime taco sauce does not make better use of seasonal summer vegetables.

Golden opportunity
Sorelle & Co., 1050 Rutherford Rd., $8.50
Victor appreciates the golden-brown crust on this gluten-free, vegan grilled cheese sandwich. “This is something I’d make for my kids at home,” he says, “but I couldn’t make gluten-free bread better than this.” The sandwich is done with a gold and brown challah bread and vegan cheese.

Playing chicken
Grasshopper, 310 College St., $5.50
The girls can’t wait to dig into these meat-free “chick-un” nuggets. “Can we eat yet?” Sofie asks before digging in. “It reminds me of a grocery store chicken finger,” Victor says, nodding in approval, while Sofie keeps going back for more.