Tearing down a local institution? | TRNTO.com
Skip to content 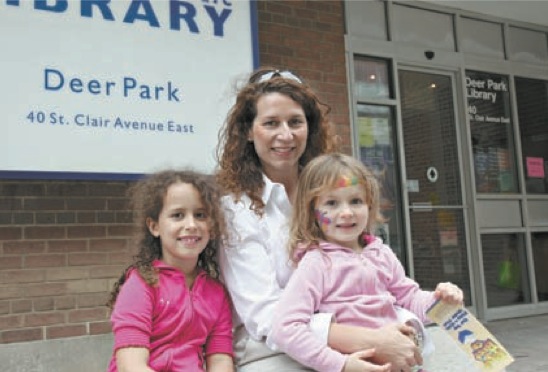 A TORONTO PUBLIC Library Board decision to declare the Deer Park Public Library a surplus property has some local residents fuming over the lack of community consultation on the issue.

On June 15, the board approved the motion put forward by the city librarian, which allows Build Toronto, headed by Mayor David Miller, to assess the site’s potential for redevelopment — with the promise that a library will remain in Deer Park, even if it means condominium units are eventually developed on top of it.

“We haven’t been consulted or heard anything,” said Joannah Lawson, a Moore Park resident with three children who regularly use the library.

Build Toronto’s mandate is to “unlock the value in underutilized lands owned by the city and its agencies, boards and commissions.” But some argue the library is far from underutilized.

“That library’s full of programs for people from six months old all the way up to 90,” said Susan Froese McHardy, a Deer Park resident. “We don’t have anything else in this area like it where the kids go, retired people go and where the teachers go.”

School board trustee Josh Matlow agreed. When the idea to build condominium units above North Toronto C. I. first emerged, Matlow said it was important to inform the public from the outset.

“I know that the norm is to barrel ahead with the plan and then try to sell it to the community,” he said. “But my view is that, from step one, you should contact the local ratepayer association, bring them into the discussion and say, ‘This is what we’re looking at, and we want you to be a partner.’”

A representative from the Build Toronto corporation, who did not want to be quoted, said there haven’t been any information meetings yet because the corporation itself is in its preliminary stages.

Ila Bossons, a Summerhill resident who uses the library, agreed that consultation is unnecessary until plans are officially proposed: at this point, it’s just too early in the process to know what is being discussed.

“It is disingenuous to complain about lack of consultation when no proposal seems as yet in city planning’s hands,” Bossons said. “It should be well-known that every development proposal, by law and by custom, will be accompanied by a public consultation process.”

The library, located just east of Yonge Street on St. Clair Avenue, is prime real estate for intensification, particularly with its proximity to a subway station.

“We don’t have anything else in this area like it where the kids go, retired people go and where the teachers go.”

But Build Toronto’s report estimates that a new library on the site would cost $6.6 million. The corporation still has to assess the property to see if developing the site, and asking a developer to also build a public library, is financially viable.

Coun. Michael Walker, who spoke at the library board meeting, said he would like to see a review of the site completed, much like the Yonge Street and Eglinton Avenue review that included a plan for another Build Toronto surplus property: the vacant TTC bus terminal lands just west of the intersection.

“We should hold a public meeting, and the Build Toronto bureaucrats could explain themselves,” he said, “but then defer it until we do that review and some planning for the site.”