Ten ways to celebrate Luminato’s tenth anniversary as the arts festival heads to the Hearn | TRNTO.com
Skip to content 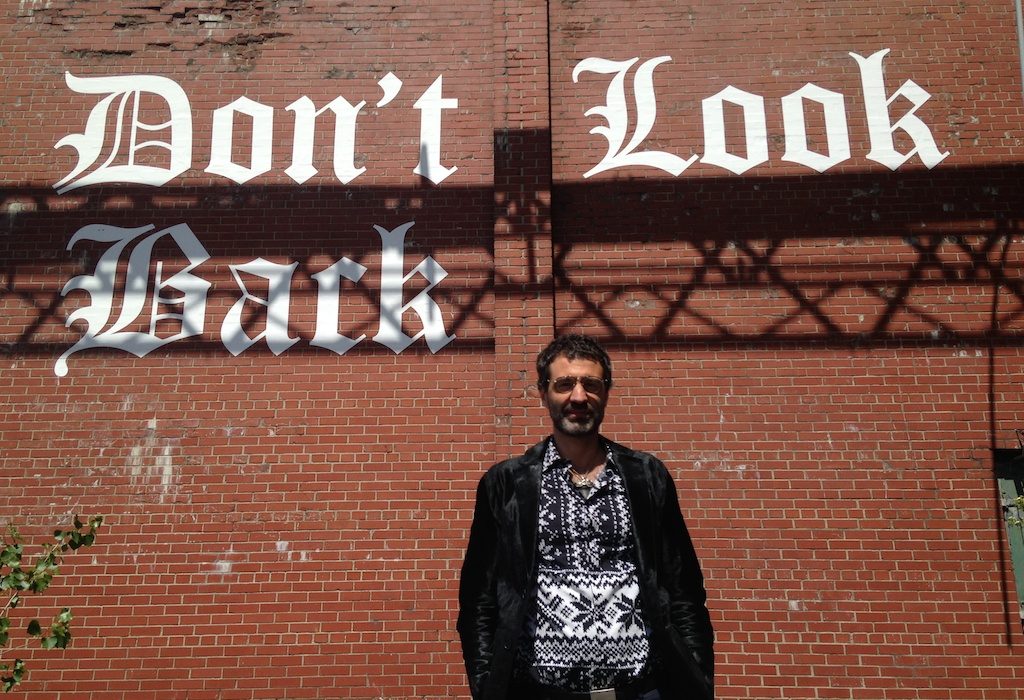 Before entering the old Hearn generating station, the site of this year’s Luminato Festival running June 10-26, patrons will pass by a sign that reads Don’t Look Back. It is artistic director Jorn Weisbrodt’s manifesto, his vision for this year’s festival, and his message for the city of Toronto. One to which I sincerely hope the city pays attention.

Luminato made the very bold and very exciting move to present all of their programming for this year’s festival — from classic theatre to after-hours drag shows — at the mothballed Hearn Generating Station in the city’s Port Lands neighbourhood. The multi-arts festival has used the Hearn in the past, particularly for its popular Unsound Toronto event and its Big Bang Bash fundraiser, but this is a next level operation with the creation of a new 1,200-seat theatre, a music and dance stage, a site-specific performance space, art gallery, restaurants and bars. And it is spectacular.

Weisbrodt has given the city a vision for an arts and cultural centre in an almost abandoned corner of the waterfront that could be home to as many as 50,000 new residents in the next 15 to 20 years. The Hearn, a massive, cavernous but architecturally splendid building, with the potential to be one of the finest centres of its kind in the world, should be the centre of that new community.

The outgoing artistic director, who signs off after the event following an incredible five years, was on hand on June 9 for a tour of the site, and there was no containing the visionary’s excitement both over what he and his Luminato crew have managed to create for this year’s festival, but also for what could be. And it is our civic duty to check it out and be part of this historic process.

This year’s lineup might not have the star-power names such as David Byrne and Joni Mitchell of some previous festivals and perhaps that has something to do with wanting to offer everything at the Hearn but there are so many gems, big and small, free and ticketed, it will be all too easy to find something that will appeal to even the most discerning of artistic palates. 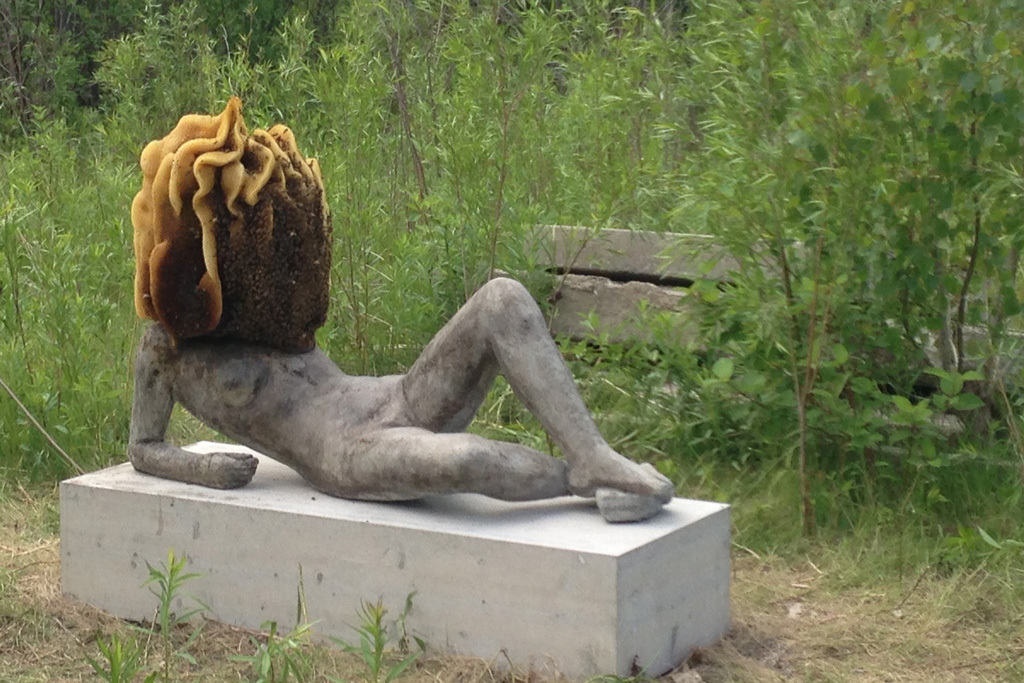 While most of the installations make use of the space inside the Hearn, Tilled is outside in a field

According to Weisbrodt, the schedule was designed to allow visitors to check out more than one thing. And most installations, performances and other artistic type shenanigans can be accessed via the main performance hall that stretches the length of the site. So no need to worry about getting lost, although that could be fun too. Guests should show up well before their scheduled performance to tour the site and view other works both in and around the Hearn, such as the Art Gallery of Ontario’s contribution to this year’s festival, a work by Pierre Huyghe that utilizes live bees entitled Tilled. It is located outside in a field between the parking lot and the entrance and should not be missed. In addition, there is a Bavarian-style Biergarten from the folks at Parts & Labour or one could eat with the cast and crew in the festival Canteen (advanced purchase).

To celebrate the 10th anniversary of Luminato, here are our top 10 ways to enjoy this year’s festival. 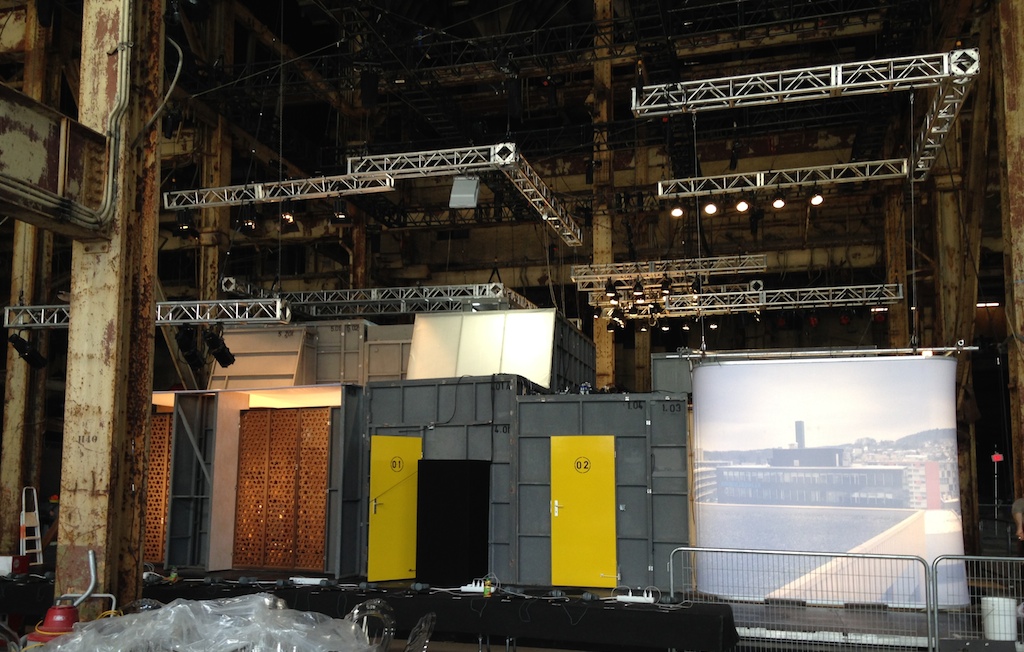 Situation Rooms by Rimini Protokoll, June 10-26: This immersive video installation allows for the audience, equipped with an iPad mini and headphones, to follow a range of 20 real-life characters from the international weapons industry.  It is political, unexpected and exciting and has been the most talked about event at Luminato.

Monumental, June 14 and 15: The contemporary dance of Vancouver’s The Holy Body Tattoo and the post-rock music of Godspeed You! Black Emperor combine with raw and thrilling results in this dance piece that should not be missed. How many chances will there be to watch a dance performance designed to challenge capitalist urban culture?

66 Wheels, June 25: Kid Koala is a quirky DJ and musician who seems to have a hankering to create different environments in which to listen to his music, and this year’s event is no different. With 66 Wheels, participants hop on one of 26 bikes for a tour across the city with Kid Koala to some of his favourite spots for music and food before returning to the Hearn to listen to his Music To Draw To. Yes, this sounds fantastic.

Canadian Citizenship Ceremony, June 18: Leave it to Luminato to come up with an artistic take on the standard Canadian citizenship ceremony. Here, the festival acts as a co-host for a bona fide ceremony with Immigration, Refugees and Citizenship Canada and the Institute for Canadian Citizenship. There will be guest speakers, live music and an opportunity to reflect on our Canadian identify. Plus, it’s one of many great free events offered this year.

Song of Extinction, June 22: This powerful and important visual and sonic feast is the result of a collaboration between composer Rose Bolton and filmmaker Marc de Guerre, with poet Don McKay penning an original libretto. The impact of humanity on the planet is depicted via large-scale projections and electronics with a chamber orchestra, chamber choir and youth chorus enveloping the Hearn in a dramatic soundscape.

The Monkey Vault Team, June 17-26: Parkour is one of the fastest growing sports in the city and is the ideal athletic complement to Luminato, as both involve reclaiming public space and looking at things just a little bit differently. This year, at Luminato, participants can sign up for $20 and learn about parkour from some of the best in the business. 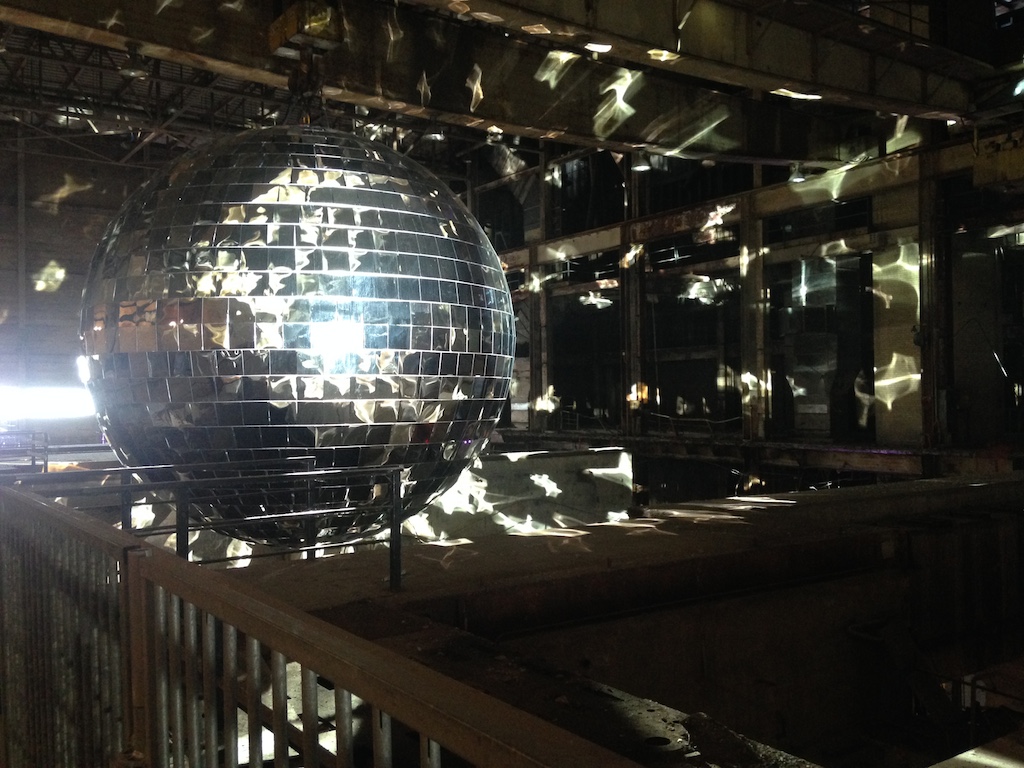 At 26 feet in diameter, this is the world’s largest mirrored disco ball. Luminato is using one of the Hearn’s original cranes to suspend it during the festival

Le Pavillon, June 10-26: This is Toronto, so of course the chefs are getting into the act. With Le Pavillon, Frederic Morin of Montreal’s Joe Beef restaurant and John Bil of Toronto’s Honest Weight combine forces to provide a unique, two-and-a-half-hour French dining experience created inside the Hearn’s control room that is scheduled to run for the duration of the festival. Foodie FYI: seating is very limited.

Trove, June 10 and 26: An intriguing gem that is a must-see for those on hand for other events. It is located on the upper level at the top of the grand staircase in the former turbine hall. Here, artist and photographer Scott McFarland has envisioned the city as a giant art gallery in which he presents 50 of its most important objects from a variety of disciplines including the first electric chair ever used, the Toronto Zoo pandas and The Massacre of the Innocents, 1611-1612 by painter Peter Paul Rubens. The works are envisioned as gallery pods, and hint at what might be if the Hearn follows along this artistic path. In addition to the display at the Hearn, an identical 50 images will be scattered throughout the city.

Beethoven’s Symphony No. 5 and An American in Paris, June 21: The Toronto Symphony Orchestra presents two exciting and quite different symphonic pieces that should be quite an experience when taken out of the concert hall and presented at the Hearn.

Rufus Does Judy, June 23 and 24: Toronto’s Rufus Wainwright is one of the most intriguing and enjoyable artists working today. He comes from a family of stellar musicians, pens his own operas, sells out theatres around the world, and continues to defy expectations by always choosing the path least travelled. Case in point, a production dedicated to recreating Judy Garland’s famous Carnegie Hall concert. This is a huge event for Luminato to close this year’s festival, and will surely sell out.