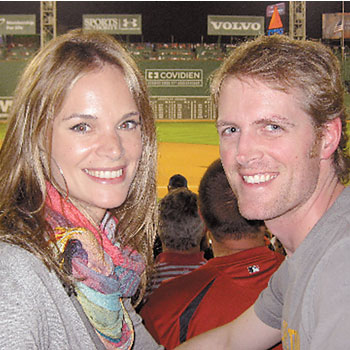 Whoever said that it’s wrong to flirt with the other team wasn’t taking this Toronto couple into account. As Jennifer Hedger and husband Sean McCormick gear up to be on-site hosts for the Vancouver 2010 Olympics (for their respective television stations of course), the sports team discuss what happened when their off-the-field romance went into overtime.

How they met
Our mutual friend Dan O’Toole (SportsCentre anchor) was getting married out of town, and while he was friends with both Sean and me, the two of us had never met. I showed up and tried to convince myself that Sean really wasn’t all that good-looking because I had been told, incorrectly, that he was there with a date. Halfway through the evening, when Sean revealed that he too, was at the wedding solo, I went in for the kill.

The first date
After observing the 48-hour rule (48 hours between last contact and calling), I called Jen, and we went to dinner to Julie’s Cuban Restaurant on Dovercourt and then for drinks at the Drake.

What happened?
Rather than ordering the Caesar salad and chicken fingers I was craving, I tried something on the menu to impress her, and I think it worked. Little did I know that Jen’s a passionate foodie, not to mention the best cook on the planet!

The courtship
When Sean and I met, he was a reporter and I was hosting the two a.m. SportsCentre, so we were keeping very odd hours. I would go by his place after work, around three a.m., and we’d watch TV and do all the things that you would normally do in the early evening but in the middle of the night.

The proposal
We already had a trip planned to the Mayan Riviera, and it seemed like the perfect opportunity to pop the question. After dinner very early on in the trip, I surprised Jen with a photo album. In every photo I was in front of a different Vegas landmark holding a different letter, eventually spelling, “Jennifer Hedger will you marry me?” We didn’t call anyone to share the news until we got home. Thank the sweet baby Jesus she said yes, or that would have been the longest week of my life.

The wedding
We got married on Jan. 12, 2006, at the same resort in Playa del Carmen where we got engaged, with family and friends, and we had an amazing week. After that we honeymooned in Brazil.

Their lives today
We’re both sports broadcasters, so we both basically eat and sleep sports. We like to take one sports holiday a year, either to New York to see a Yankees game or a road trip to Boston to see a game at Fenway. Our other passion is music. We love to travel, and we make an excuse to go to places we may not otherwise go, to see our favourite bands abroad. This summer we went to Dublin to see U2 — standing on the floor together surrounded by 90,000 people was definitely one of the most unbelievable moments of our life together so far.