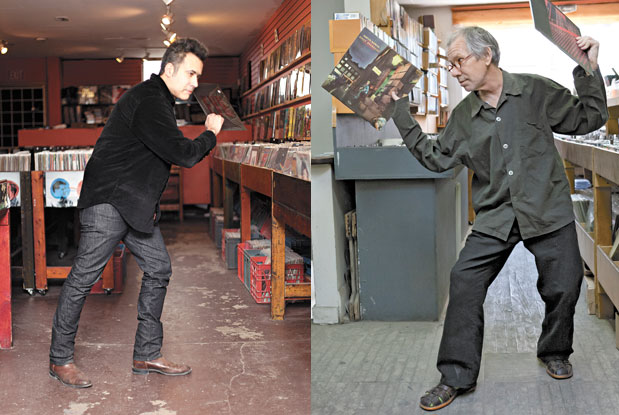 Toronto's best record shops all have two things in common. First, they're manned by people who are intensely passionate (and knowledgeable) about music. Second, they boast a good mix of old-timey vinyl classics and newer cuts that are nicely suited for being mixed in front of a crowd, or enjoyed on a quiet, navel-gazing afternoon in your bedroom.

She Said Boom – 393 Roncesvalles Ave. and 372 College St.
She Said Boom has two Toronto locations—one on College, which opened around 19 years ago, and the other on Roncesvalles, which opened some nine years later—and both showcase a great selection of used books, new and used records, and CDs. The stock on College St. features mainly used vinyl, pricey original pressings, and some reissues, and they stick to old-school psychedelic and rock. They also have the self-professed "smallest, tiniest selection of DVDs," mostly Criterion. The Roncey location boasts more new records (and less books) and records from the bin will typically set you back between $6 and $30.

Rotate This – 801 Queen St. W.
Rotate This is one of the best-known record shops in town, and for good reason—they've been trucking along for over 20 years, due in large part to stocking a democratic selection of new and used vinyl that doesn't just resign itself to the fringes of music (although they might be somewhat prejudiced against classical artists). From indie, to rock, to jazz—chances are you'll find it here, as well as used turntables, a brush or two, and concert tickets. Records average around $20, although they can range from $2 to $300.

Sonic Boom – 782 Bathurst St. and 201 Augusta Ave.
Sonic Boom also boasts two locations—one in Kensington (that opened about 3 years ago) and the other in the Annex (which opened its doors 15 or 16 years ago, then recently moved across the street). Both focus on vinyl, but also stock CDs, DVDs and Blu-Rays. The head-to-toe music lover will enjoy Sonic Boom's selection of shirts, music-related books, and even quality record players on which to enjoy your new purchases. Their collection of records ranges from $0.99 to hundreds of dollars.

Vortex – 2309 Yonge St.
Vortex is what you'd call an oldie but goodie. Opened in 1978, and occupying their Yonge St. location since 1987, their used vinyl prices (starting on average at $2.99) are what manager Lincoln terms "the cheapest in the city." You'll also find CDs, DVDs, Blu-Rays, but no hardware. What they do have in spades is new exclusive vinyl and limited edition records—you can peruse their current stock here—many of which can't be found elsewhere in the city or country.

Grasshopper Records – 1167 Dundas St. W.
One of the newer entries on this list, Grasshopper Records opened about 2 years ago. They're host to a small selection of used CDs, DVDs, and VHS tapes, but the thrust of their business is used vinyl, some new local records, and the odd used record player. Their records run from $1 to rarities that ring in at several hundred dollars—manager Simone tells us that they currently stock a first press Sonic Youth Confusion is Sex for $200. Grasshopper is also willing to go the extra mile to locate an album at your request.