The Big Chill gets a little sister with The Little Dog, a pocket-sized haven for hot dog connoisseurs on College | TRNTO.com
Skip to content 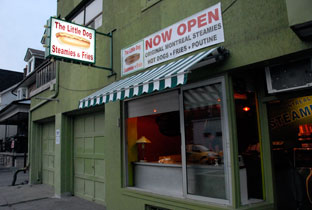 Since hot dogs are pretty much the only thing street vendors can legally sell in Toronto (still), our streets are flooded with them — usually Shopsy’s; always grilled. But according to Sam Santino, owner of The Big Chill and the newly-opened The Little Dog, a properly done hot dog is always steamed.

“A hot dog needs to be steamed,” he says. “When you grill them or barbecue them, you lose the juices, you lose flavour.”

The self proclaimed hot dog connoisseur opened The Little Dog last week as a tiny, takeout-oriented, carnivorous counterpart to his popular ice cream parlour, The Big Chill. Offerings include Nathans dogs (New York-style, $3.49), Chicago 58 dogs (Coney Island-style $3.49), and, in what could be a Toronto first, the Montreal steamie ($1.99), a tiny Lesters hot dog that traditionally comes served all-dressed with cole slaw, mustard and onions. Vegetarians haven’t been left to the wayside — there’s a veggie dog too at $3.49. All the dogs and buns are, of course, steamed.

The simple menu also sells poutine ($3.99) and chili cheese fries ($3.99), along with a sizable list of toppings. Open until midnight on weekdays and until 1 a.m. on weekends, the opening of The Little Dog can only mean one thing: the corner of College and Manning is officially becoming a mecca for seekers of some lowbrow indulgence. A grand opening — complete with free samples — is set for May 15. 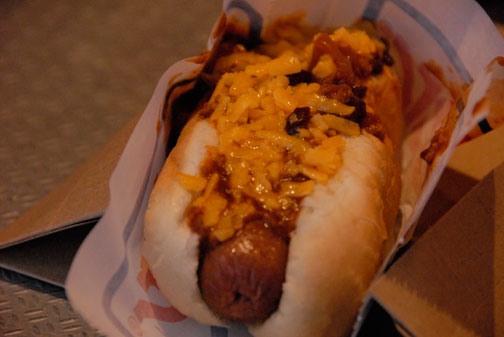