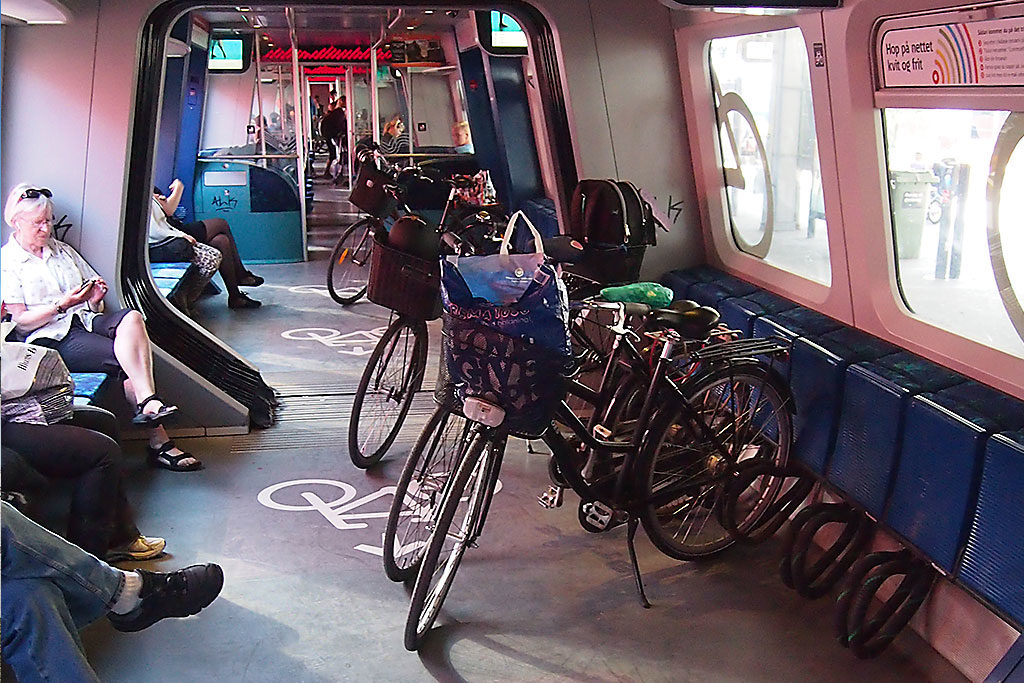 Toronto has a congestion problem, and people are fed up. Could bicycles help? The simple two-wheelers may hold the key to transforming our city the way they have Copenhagen. We asked Torontonians for ideas that would help those living outside the downtown core to give the two-wheeled commute a try.

An expressway for bikes
Suburbanites want to commute by bike. They like being outside, getting their cardio and bombing past backed up car traffic. The problem is they don’t want to die or be maimed by drivers who are aggressively trying to get home for dinner (and who in fact hold cyclists in contempt).

The solution is simple. Separated commuter bike lanes direct from the ’burbs with no lights, no close calls and no fingers.

Don’t force us onto waterfront trails with children, joggers and pets. Don’t force us into side streets so we have to zigzag and add unnecessary kilometres. Our families should not have to worry about us getting whacked. We have built 400-series highways, QEW, the Gardiner and the DVP for drivers. Time to do this for us. Build it and they will come.

Mix and match modes
Despite what advocates might tell you, the bicycle in isolation will never totally replace the car, as it lacks the required range. Similarly, public transit in and of itself won’t substitute for the automobile, as it lacks the necessary penetration. But combine them into a single “bike-transit” system, and a seamless, door-to-door mobility option is unlocked, one capable of replacing thousands of car trips and reducing congestion. Not only does this streamline the transit system — allowing for fewer stops, further apart — but it delivers more customers to the system and more cyclists to the bikeways, in a virtuous circle of sustainable transportation. The Dutch have made a point of building large bicycle parkades at every train station, and making rental systems available at the other side of the trip. Through those methods, over 50 per cent of Dutch rail passengers arrive by bike

Chris Bruntlett is an architectural designer and the co-founder of cycling website Modacity.com.

Incentivize cycling
Toronto is in the midst of a gigantic upheaval. Within the next 10 years, we get to determine whether we become the next global city or decide that “good enough” defines us. Where other global cities have found cycling increasingly important to moving people around packed urban centres, we’ve incentivized parking. In Toronto I'd love to see bikes incentivized the same way cars are. Getting people out of cars will create a healthier population. Reducing car usage will lower road maintenance costs, freeing up funds to fix more potholes and build safer roads for everyone.

Electric company
After testing an e-bike on a cycling tour from Shanghai to Hanoi, I was amazed at how simple and easy it was to ride an e-bike. In a city such as Toronto one would be able to reach his/her destination faster than a car without any need to strain or sweat. This includes any hills. If various levels of government would add an incentive in terms of a tax rebate to buy an e-bike that would add to the speed at which this would happen.

A lane to nowheresville
While the city’s current bike plan does include the expansion of the bike network into the suburbs, it’s only scratching the surface, and as ever, these projects get mired and delayed in the same old tired battles at city hall (REimagine Yonge being a prime example). Torontonians across all parts of this city deserve a safe connected network of bike lanes so that it’s not just those who live downtown who are able to enjoy the myriad benefits of cycling transportation. Want bike lanes? Call, email, tweet your local councillor and Mayor John Tory to let them know.

Yvonne Bambrick is a longtime cycling advocate and author of The Urban Cycling Survival Guide.

Ch-ch-changes
Want to bike but worry about arriving to work sweaty and disheveled? Or feel concerned about locking up your bike outside? A recent poll conducted for Share the Road Cycling Coalition found that 50 per cent of Torontonians would cycle more if there were bike parking facilities at school or work. It would be great if, in addition to more and better bike infrastructure, the city prioritized adding secure indoor bike storage, parking, change rooms and shower facilities to give commuters the green light to bike to work. During June’s Bike Month festivities (May 28 to June 30), the city could also help promote commuting beyond Bike to Work Day by directing resources to getting these facilities in local workplaces.

Sarah Bradley is the communications manager for Cycle Toronto.

A pedal a day
I'm a family doctor. I spend a lot of my time counselling my patients about what they can do to improve their health. Riding a bike is one of the very best ways to do this. There have been several major studies recently that show that people who commute to work by bicycle reduce their risk of heart disease, cancer and other illnesses by half! That's better than any pill I can prescribe.

Dr. Peter Sakuls is a family doctor and founder of the advocacy group Doctors for Safe Cycling.