The biggest fight of their marriage | TRNTO.com
Skip to content 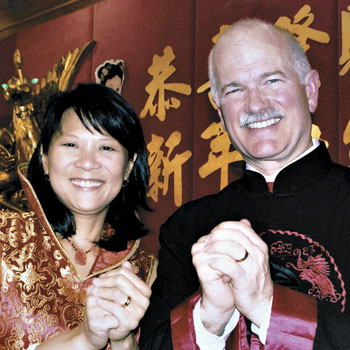 Respectively serving as leader of the New Democratic Party and member of Parliament for Trinity-Spadina, Toronto’s political power couple, Jack Layton and Olivia Chow, have found common ground both in and out of caucus.  The democratic duo discuss how they came to be a party of two and how their respective battles with cancer have brought them closer than ever before and why, even after 20 years, they still agree that love is the best policy.

How they met
I was the auctioneer at a Mount Sinai Hospital fundraising auction at Village by the Grange in Toronto organized by Dr. Joseph Wong.  Olivia was the translator for the auctioneer, as the audience was primarily Cantonese speaking. I fell in love instantly. Olivia took a few weeks longer.

The first date
Jack invited me to talk about my run for the school board and to have a drink together. July 19th was the date. It was a hot Friday night with many stars. It was love all around, and we began to plan much more
time together.

The courtship
Our second date was swimming together in the pool at the Sheraton Hotel. One more evening together, then Olivia took off as the only woman in a four-person, three-week canoe trip, previously planned, followed by a trip to see her family in California. We didn’t see each other for four weeks! Our next date was a weekend at a friend’s cottage. That sealed the deal, and we made plans to move in together the next month.

The proposal
Although we were living together already, after three years, we jointly realized two important things: Olivia’s mum would be much happier if we were married, and the wedding could be one terrific party with our family and friends!

The wedding
July 9, 1988, Toronto:  The first part was midday, Toronto Islands, an outdoor wedding with 400 friends and family. The second part: a Chinese banquet with 600 family and friends. Third part: official Chinese tea ceremony and dance with the band Parachute Club and rapper Clifton Joseph at the St. Lawrence Farmers’ Market with 1,100 family and friends. We danced until 4 a.m., even though Jack had a cast and cane, having broken his leg in a bicycle accident 10 days before the wedding on the tandem bike that was our wedding gift to each other.

The honeymoon
With a broken leg, the planned whitewater canoe and hiking trip was replaced by a sedate week at Arundel Lodge in Muskoka.

Shared goals
We have loved working side by side as city  councillors and now as members of Parliament, trying every day to build a better world. We share goals, hobbies and family.

Their lives now
We live in downtown Toronto with Olivia’s mother, Ho Sze Chow. We have a place to stay in Ottawa when we are there. We have bicycles in both places (no car needed).

Secret to success as a couple
Shared values and deep respect for each other’s commitment and work.  And then there’s the fun, in all its dimension.

On fighting cancer as a couple
The fact that Jack and I encourage each other and give each other strength in dealing with cancer is very helpful in our recovery. Since I have fought the battle and won, I think it encourages Jack and helps with his own outlook.