The biggest Toronto shows in May | TRNTO.com
Skip to content 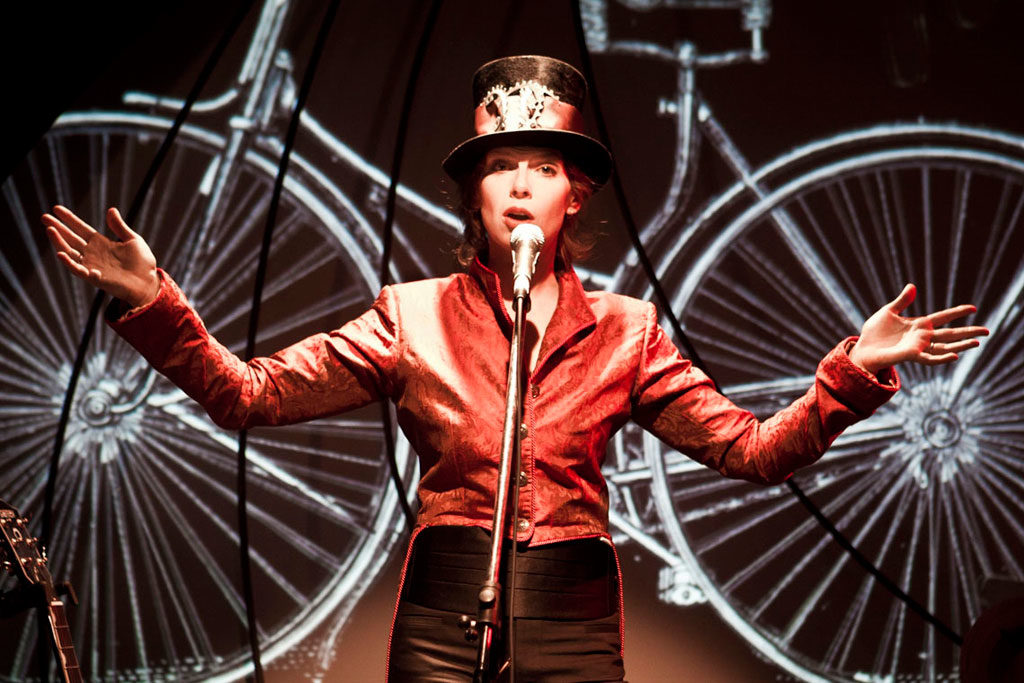 Award-winning Toronto theatre artist and innovator Evalyn Parry is back in town with her stunning bicycle-themed work SPIN. Through a series of songs played live on a vintage bicycle — from fenders to spokes to bells — Parry takes her audience on an innovative musical and theatrical journey about women, cycling and liberation. SPIN is influenced in part by the incredible true tale of Annie Londonderry, the first woman to ride around the world on a bike in 1894.

SPIN will be presented May 8 at Jane Mallet Theatre.

The Minister of Silly Walks himself is coming to Toronto to present an evening of humour and political insights in Why There Is No Hope. Cleese is best known for his work with the groundbreaking Monty Python’s Flying Circus sketch comedy show responsible for such memorable skits as “Ministry of Silly Walks” and “The Dead Parrot” and its subsequent series of absurd and wonderful films.

Festivals are few and far between in Toronto this year, but on May 25, Toronto bands Alvvays and Stars headline the CBC Music Festival at Echo Beach. Other performers for the all-day event include Buffy Sainte-Marie, Rhye, Coeur de Pirate and Charlotte Cardin. The event also includes a kids’ zone and food truck fair.

The annual Scotiabank Contact Photography Festival gets underway this month with a launch party on May 1. The 23rd edition of Contact features 23 exhibitions and 15 public installations, including a headlining presentation of the work of American artist Carrie Mae Weems. Her work will be presented in two gallery exhibitions and three major public art installations in downtown Toronto.

Weems’ Blending the Blues is at the Contact Gallery, 80 Spadina Ave., running May 1 to July 27.

This Soulpepper production is set in the Deep South where music and ritual intertwine with Yoruba mythology. The Brothers Size is part of a trilogy of plays by American playwright Tarell Alvin McCraney, who also co-wrote the film Moonlight, which won the Academy Award for Best Picture in 2017. The Brothers Size is described as a “bracing, honest and moving portrait of brotherhood.”

The Brothers Size runs May 4 to 26 at Soulpepper.

Lowest of the Low

Iconic Toronto band Lowest of the Low will be in town with its new album, Agitpop. Best known for the legendary album Shakespeare My Butt, the band, led by brilliant singer-songwriter Ron Hawkins, has been building serious momentum the last couple of years, culminating in the new major label release.

Lowest of Low plays the Danforth Music Hall on May 31.

Winner of three Tony Awards and the 2010 Pulitzer Prize for Drama, this bold play about a family in crisis, Next to Normal, gets a new Toronto production opening this month courtesy of the Musical Stage Company.

Next to Normal runs April 26 to May 19 at the CAA Theatre.

The Art Gallery of Ontario’s new permanent edition Infinity Mirrored Room – Let’s Survive Together, by acclaimed artist Yayoi Kusama, opens to the general public on May 25.