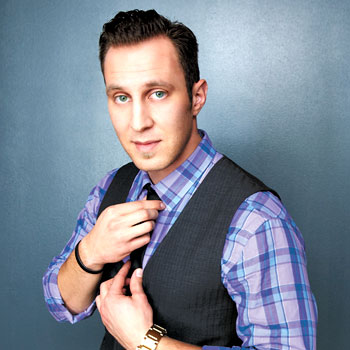 If The Dude from The Big Lebowski needed an interior designer to fix up his living space, he’d call Damon Snider.

Snider hit the ground running after started his Type-D design firm, making a name for himself as a man-cave specialist. His Twitter handle says it all: TheDudeRefined.

Recently, Snider has been featured in a number of newspaper articles in addition to an appearance on The Morning Show with Liza Fromer. His dude aesthetic is unique, and he stumbled upon it by accident.

The 2010 Forest Hill Collegiate Institute grad drifted from personal training to graphic design to building furniture, but when he decided to fix up his own living space everyone took notice.

Snider brought over his made buddies to hang out and see his work and he noticed that they were quite impressed. But the true test was when he brought some women over, but they were also impressed by his style surroundings.

Snider soon founded Type-D Living and became an interior designer. Instead of focusing on more high-end clientele or families, Snider set his sights on the average Joe for Type-D.

“I wanted to focus on these guys who if not for me would have posters on the wall or beanbag chairs or random pieces of furniture,” Snider says.

It’s a field that Snider felt he couldn’t have anticipated, when he was in high school, as back then he floated along hoping that he’d find exactly what it is he wanted to do for the rest of his life. Interior designing it turns out was the answer.

He found himself loving the freedom of working for himself, the creativity that he gets to express and that no job was ever the same. Another perk of the job was helping his fellow man.

“A lot of these guys don’t know what they really want, so I get to express myself, and they sort of hang on to my words and trust my judgment,” Snider says.

Snider says he excelled in virtually every class, but finding that perfect job wasn’t easy. He suggests to high school students who were as stuck as he was to stick with it to find their calling.

“My only advice is that you won’t know exactly what you want to do and everybody is nervous and scared and trying to figure it all out, but there’s definitely time for that whole process to make sense of it.”