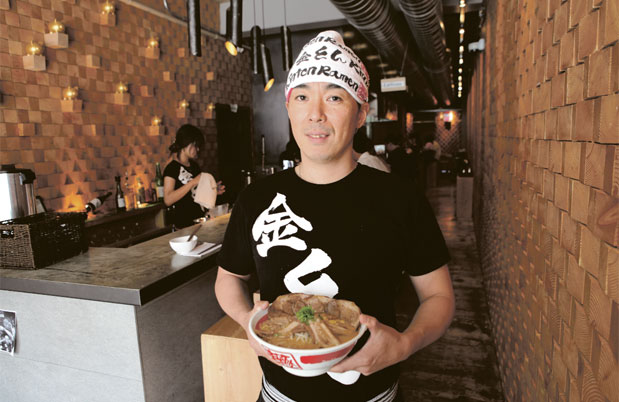 Renowned chef David Chang — ever heard of him? — has expanded his Momofuku empire to Toronto. Of course, that’s only news to those who have been living under something decidedly stone-like for the past year. The resultant buzz has turned Toronto’s foodsters into a throng of screaming Bieber girls, but is Momofuku going to revolutionize the city’s restaurant scene? Probably not. It already did that several years ago.

For proof, look to the steamed pork bun. Toronto has appropriated Chang’s version of it ad nauseam at places like 416 Snack Bar, Banh Mi Boys and the El Gastrónomo Vagabundo food truck. Chang’s signature blending of casual dining with fine dining is now de rigueur here, and as for ramen — upon which Chang built his empire — well, Toronto has only recently started taking it seriously. It’s as if Chang’s imminent arrival prompted Toronto to prove that it’s not home to cavemen.

For some, the word “ramen” is evocative of cheap instant noodles, of empty calories, of salty soup powder, of university essays that were due yesterday morning. It’s the Asian equivalent of Chef Boyardee — or so the uninitiated believe. But in Japan, ramen is an art.

I still remember living off of instant ramen noodles in college, back when I considered myself an unflappable genius for garnishing the soup with garlic powder. Fortunately, most places that take ramen seriously add things significantly better than that to their bowls: pork belly, nori, pickled ginger or boiled eggs.

For those who are new to ramen, there is a word you should remember: “tonkotsu.” It’s one of the traditional ramen broths and, of them all, it has the most swagger. Tonkotsu is made by boiling pork bones for hours, until the broth gets creamy white, like some kind of weird, ultra-refined pork milk. Cool it down and I’d bathe in it.

I prefer tonkotsu to the saltier shio, the soy sauce heavy shoyu or the nuttier miso broths. Many ramen houses that use tonkotsu like to expound on its health benefits: pork collagen, they would have you believe, is very good for you. I like it because it tastes good.

Before Momofuku came around, Toronto had three main ramen stalwarts: Kenzo Ramen, Ajisen Ramen and Kinton Ramen. Kenzo and Ajisen opened when ramen was still an oddity in Toronto, but in the past few years, the former has expanded significantly, and the latter plans to. Kinton, the best of the three, opened in May, but all of them are worth a visit.

A project from the team behind Guu, Kinton Ramen is diehard in its love of pork. This is a good thing. Which would you prefer, shoulder or belly? Would you like extra pork with that? (That will be two dollars, please.) How much pork fat do you want scooped into your bowl before the pork broth goes in? Vegetarians: sorry, but you’re screwed. Kinton’s steadfastness is one of its best qualities. One of its worst qualities is the lineup that must be endured to get in.

Kinton is secretive about many of its techniques, but this much we do know: the broth is a tonkotsu base, made with pork and chicken bones, then, after an extended boiling period, fish and vegetable broths are added for an umami kick. The noodles are made with flour, in-house. They have about as much bite as an angry Kodiak.

Kinton flavours its tonkotsu broth with different essences — such as shio, shoyu or miso — according to the customers’ fancy. The type of flavouring doesn’t matter as much, in my opinion, since Kinton’s broth lacks punch anyway. But some of these flavours come with a seasoned egg, and if yours doesn’t, get one for an extra $1.50. I get weird looks when I order two eggs, but I couldn’t care less because they’re perfect: solid whites on the outside, with a slowly oozing, cool yolk on the inside. Take a bite and watch the egg pour a golden, delicious halo into the broth.

Over in Chinatown, Ajisen Ramen is a Japan-based chain with hundreds of locations worldwide, including two others in the GTA. Call me a corporate shill all you like, but I enjoy the ramen here. Few would dispute the fact that even prepackaged instant ramen still has its merits, so really, how bad could it get?

With its hot-pink seats and Hello Kitty–esque logo, Ajisen is for those with a fairly high tolerance for kawaii (the Japanese culture of cuteness). It’s not as diehard as Kinton is, meaning you can get options other than ramen, and vegetarians will actually be able to eat here.

Still, Ajisen takes great pride in the fact that it specializes in tonkotsu broth. The signature ramen here is the “tenderous pork rib” ($8.50). The ribs apparently take four hours to prepare, and they are indeed tenderous. They’re also full of gelatinous fat, which complements the tonkotsu quite nicely. The noodles aren’t made in-house — they come from a factory in Hong Kong — and they don’t have the same attitude that Kinton’s do, but Ajisen is geared to a more fast-food type of crowd anyway.

Kenzo Ramen (372 Bloor St., 416-921-6787), meanwhile, is a mini-chain with four locations city-wide (the latest just opened at Yonge and Sheppard). Kenzo also takes an artisanal approach to its ramen, making all of its noodles in-house and aging them overnight for flavour.

For a bowl that’s interesting, go for the King of Kings ($11.95): a spicy ramen soup with roasted pork, sliced egg, and seaweed. For the best soup in the house, go for the tonkotsu ($9.95), of course.

Momofuku will certainly make things more interesting here, but Toronto’s ramen scene is about to get even more diverse.

Several new ramen houses are on their way, including Raijin Ramen on Gerrard Street (which will feature extra-thick tonkotsu) and Japanese chain Santouka, which simmers its tonkotsu for 20 hours before adding vegetables, dried fish, kelp and other ingredients.

Toronto is expected to have a real winter this year, with snow and all of that. So consider this boom a blessing: ramen is food with soul.