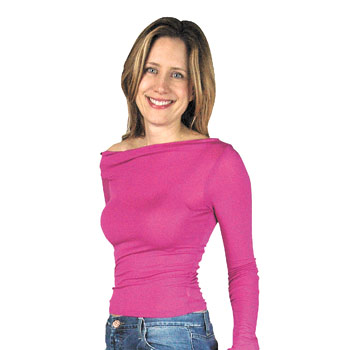 UNTIL I SPENT an hour chatting with her, I had no idea Liza Fromer and I had so much in common.

Aside from our similar broadcasting backgrounds, we’re both exhausted mothers who believe balance is a myth. Now seven months pregnant with her second child (it’s a girl), Fromer shares her life with me while waiting for some test results at her doctor’s office.

The former Breakfast Television host shocked everyone when she left that gig in 2006 — around the time she announced her first pregnancy.  Viewers were devastated.  She’d had an offer from Slice to host a new show.

Fromer took a nine-month maternity leave and then dove into production for The List, a series that granted people wishes then filmed them living out their dreams.

She explains, "My hope was that this new job would give me more time at home, which was not the case … I’ve given up on the idea that balance is possible."

Fromer feels the do-it-all movement does a disservice to moms, particularly when promising that being a busy superwoman will make one happy.  "You can’t do it  all, " she says, "but you can do your best."

After two seasons of her show, Fromer was exhausted. When the show wasn’t renewed, she breathed a sigh of relief.

As a consummate professional, Fromer tried applying her all- controlling work ethic to raising her son. I did the same with mine. Both of us failed miserably. I chuckle in agreement as she tells me, “I used to be this person in charge of her career and her time. Then this small person shows up and totally takes control. I had to learn to let go of controlling the universe for a while.”

Although she’s read “all the books” on parenting, most of what she learned about motherhood was experiential. With a new baby on the way, she’s looking forward to adjusting her parenting style.

“This time, when my daughter is born, I’m really going to enjoy the baby stuff. I rushed through it the first time. I wasn’t living in the moment. I was waiting for him to crawl, walk and talk.”

As for her career, Fromer doesn’t feel she has the kind of time she did pre-kids to dedicate to it. “As I turn 40, the way I choose to spend my time is important to me. Today, I want to do things that are fulfilling and that matter.”

For examply, she recently chose to visit Tanzania with Mike Holmes, to co-host a fundraising video for SOS Children’s Villages,  a charity that helps orphans and abandoned kids.

I also had the opportunity to experience life in Africa first- hand and related to Fromer’s gut reaction to the situation. “I thought I’d be professional and deal with my emotions,” she says. “Instead I found myself running out of a near empty hut that these parentless families live in and had to cry for 20 minutes. All I could think of is this should not be happening to children.”

Despite her career rethink, Fromer is keeping busy. She just signed a deal with Tundra Books to publish a series, co-written with her doctor sister-in-law, to help answer the myriad medical questions kids have about their bodies.

The first will be published in spring 2011.