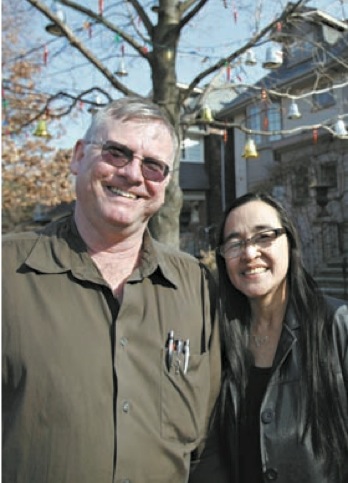 PAUL MACKLE HAS been both a Boy Scout and a Scout leader. He’s spent time as a Bruce Trail hike leader and volunteered with the homeless at drop-in centres in downtown Toronto.

It’s no surprise, then, that about 10 years ago, Mackle founded the Street to Trail organization, which merges his two great passions. With his wife Diana, Mackle leads small groups of homeless people on hiking trips in the wilds outside Muskoka. Excursions typically take place every second week.

There are day hiking trips, weekend overnight trips, canoe excursions and even bicycle treks for people of all skill levels.

Participants help set up camp and are assigned duties like gathering firewood and water.

“The main thing is that the street population’s skills are low and motivation is low, so we want to build these things up,” Mackle explains. The trips encourage self- reliance as well as team-work. Participants also learn how to trust others and how to depend on their peers. Perhaps most importantly, they are given a taste of community.

“We’re taking somebody who’s really in despair and giving them that gleam in their eye,” he says, “They feel good, they feel as though they have a future, a sense of greater possibilities. That’s what I like.”

And what happens when they get back to the city? Some get back on their feet, find places to live, or take the first steps towards kicking drug and alcohol habits, says Mackle.

Others start giving back to the community in their own way. They come back to volunteer in drop-ins or to do small jobs, and they start to feel useful and needed. They develop a renewed sense of energy.

“One of my biggest theories is make them feel really good and they’ll come back and do good,” Mackle says.

As for the rest of the hikers, he sometimes sees their familiar faces at the drop-in centres, and they update him on how they’re doing.

Mackle recruits the participants himself. He can often be seen sitting in seven different drop-ins around the city with a photo album of past trips.

Those who sign up are drawn in by the pictures of smiling faces and breathtaking scenery, and are eager to take part in a memorable experience. It’s likely they are also attracted to his caring, gentle demeanor and easy laugh.

Of course, giving back to his community in this way certainly takes a lot of effort — not to mention time. He spends about 80 hours on his organization each week.

The local resident is aiming high with his goals for the future of Street to Trail.

“We want to go bigger, much bigger,” he says. In fact, he would eventually like to train other volunteers to be hike leaders and give them the opportunity to help others. In this way, more groups could be taken on trips more often.

A major obstacle the organization faces is funding. For Street to Trail to continue in its work, support is strongly needed. In fact, Mackle spends the bulk of his time fundraising for the organization, and approaching various companies for donations.

“I’m developing something here that’s giving back to the community,” he says.

Post City Magazines salutes Paul Mackle for his tireless work to give Toronto’s homeless a sense of community.