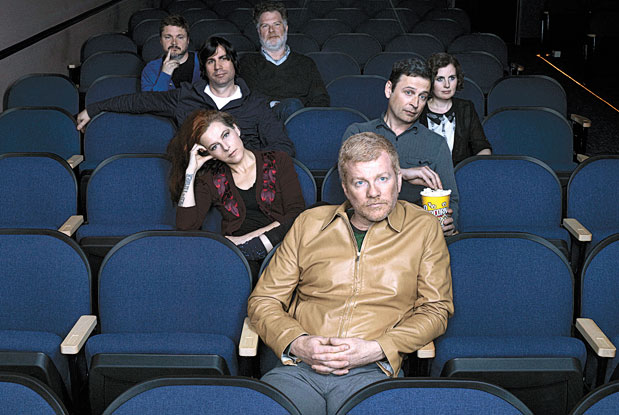 Despite the growing fame of the band’s high-profile members, somehow the New Pornographers have managed to keep it together long enough to put out a string of gorgeous pop albums that stretches nearly 15 years. And their latest effort, Brill Bruisers, released Aug. 26, is, as expected, nothing short of brilliant.

The New Pornographers could be the last remaining indie rock collective that harkens back to the early 2000s heyday when they and other groups, such as Broken Social Scene, managed to corral some seriously talented musicians with their own thriving projects into an indie supergroup of sorts for occasional touches of musical brilliance.

The band includes Carl Newman, who performs under the name A. C. Newman for his solo projects and was also a member of bands Zumpano and Superconductor; Dan Bejar (Destroyer and Swan Lake); John Collins (Destroyer and the Evaporators); Kurt Dahle (Limblifter and Age of Electric); and solo performers Neko Case and Kathryn Calder along with Blaine Thurier.

The New Pornographers’ music tends to be shinier and happier than material done by members outside the band, and Brill Bruisers is no different.

“For my solo stuff I consciously try to make that a more solemn affair,” says Carl Newman, the band’s principle songwriter and one of many vocalists. “I absolutely did not want it to be low-key. We wanted it to be a lot bigger, brighter. We didn’t want any low-key ballads.”

Instead, as the album title Brill Bruisers suggests (recalling the home to American popular music, the Brill Building in New York City), the band pounds out brilliant pop gems with breathtaking ease combining the technical hocus-pocus of today with the pop sensibilities of the ’80s.

“We were looking for a very specific feel,” Newman explains. “We just didn’t know what that feel was, but we knew when we heard it.”

The album was produced by Newman and Collins at Little Blue in Woodstock, N.Y., near Newman’s home.

Since the band formed back in 2000, Newman has held the reins as the songwriter in the band with Dan Bejar contributing three additional songs per album on the band’s six recordings. Both Newman and Bejar, along with Case and Calder, handle the vocal duties.

The band’s debut, Mass Romantic, garnered significant critical acclaim. In 2007, Blender magazine ranked it as the 24th best indie album of all time.

Making the New Pornographers work has never been easy, Newman says, and although the careers of his fellow bandmates have grown exponentially, most notably Case, Calder and Bejar, things are still pretty much at the same level of difficulty. And that’s OK.

“Neko being the obvious case: back when we started out she wasn’t as popular, so she had to tour more,” he says. “Now, it’s just a different reason that she is harder to nail down. It’s always been difficult to get us together, and I’m always amazed that we do it. I’ve just sort of accepted it; it’s the nature of our band.”

The New Pornographers will be in Toronto twice this month for a performance to an industry-heavy crowd on Sept. 8, as part of the invite-only Festival Music House during TIFF, as well as a slot at the massive Riot Fest (Sept. 6 and 7) featuring headliner the Cure, among many others.

For more information, go to thenewpornographers.com.