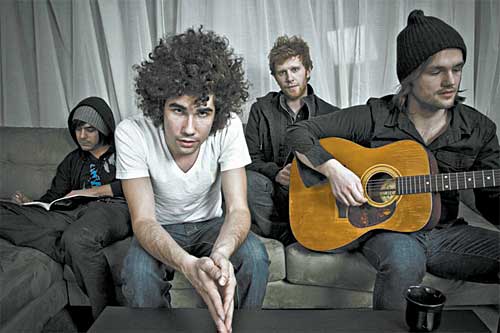 THE MIDWAY STATE is not your typical angsty indie rock outfit. They’ve got a hit record, two Juno nominations, international tours, a slot playing this month’s Edgefest concert at Downsview Park and a singer-songwriter with a medical condition worthy of an episode of House.

Nathan Ferraro, who co-founded the Toronto-based piano-pop foursome back in high school, has synesthesia. To say he “suffers” from it would be overstating the matter as, simply put, Ferraro sees colours in sound. “It’s a sensory overlap,” he says over the phone from his apartment, where he’s in the midst of composing music for the band’s second album. “My understanding of sound is through its colour.” Trippy, to be sure.

From the squeal of car brakes to the ring of a doorbell to the beating of a drum, every sound evokes “a feeling of colour,” he explains. He taps a key on his piano to demonstrate. “G7 is a grey-black on the piano; on an acoustic guitar it’s a lot more green. B is more of a blue-purple,” he says. “Every song has a distinct colour palette.” For example, “Nobody Understands,” off the band’s debut disc, Holes, is a dark rose red, while “Never Again” is a saturated royal blue. Although even Ferraro isn’t quite sure. “I’m also colour blind, so who knows?” he says with a laugh. “But if a song doesn’t have the right colour and the right vibe, then it doesn’t feel finished.”

Exactly how Ferraro’s synesthesia influences the Midway State’s music also isn’t clear. But it’s hard to argue with the results: lush piano-driven melodies draped over Ferraro’s poetic lyrics and buoyed by his soulful vocals, with just enough catchy singalong hooks to balance the tender emotions and keep your feet tapping.

Released last year, Holes spawned the Billboard Top 30 single “Never Again,” and the song “Unaware” was featured on an episode of the teen soap The O.C. Earlier this year, the Midway State picked up Juno noms for Best Pop Album and Songwriter of the Year. “When the nominations came out, Daenen [Bramberger, the band’s drummer] called to tell me, and I was 10 feet off the ground,” says Ferraro.

Listen to any of the Midway State’s music and you can hear the influences of contemporary artists like Coldplay, Sigur Ros and the Killers, but it’s all tinged with the classic pop and rock the band grew up listening to, from Carole King and Cat Stevens to Neil Young and Peter Gabriel.

“Our influences are pretty eclectic,” says guitarist Mike Wise. “Growing up in Thornhill, my dad taught me to appreciate the Beach Boys and Beatles; my sister exposed me to Nirvana, Green Day and Pearl Jam; and then I found Jimi Hendrix, Led Zeppelin, jam bands like Phish.”

“It’s strange. I love all that older ’80s music, and I certainly appreciate the new stuff, but I don’t actually listen to a lot of music,” says Ferraro, who doesn’t own an iPod.

Now, you can’t swing a dead cat in this town without hitting an aspiring indie band. Once in a while, though, amid the demo dreck, a little talent comes to the fore.

But for all their success, Wise sheepishly admits that they still rehearse in his mom’s basement in Thornhill. “The guys don’t like to talk about that, but it’s who we are and where we’re at,” he says. Who says Can-rock stardom isn’t glamorous?

“Being in a band can be wild, but probably not the way most people imagine it is,” Wise continues. “One day you’re playing for six people in a bar in Saskatoon, the next it’s a sold-out arena in Paris opening for Evanescence, and then it’s a headlining gig in front of the hometown crowd at the Mod Club that sells out. It’s all pretty surreal.”

Surreal and a long way from where the Midway State started seven years ago when singer-songwriter Ferraro and Bramberger realized that all the cool kids in their hometown of Collingwood were musicians in their own bands. “Since we didn’t know how to play anyone else’s songs, I started writing songs for us,” says the 23-year-old Ferraro, whose mom taught him how to play piano when he was six. “I tried to write a song a day, and I’ve still got boxes of tapes from those days.”

When Ferraro got his driver’s licence, his dad handed him the keys to a beat-up Chevy van, and the guys ditched their little ski town north of Toronto for an impromptu cross-country tour. “We booked all our own gigs and played anywhere that would have us: clubs, bars, coffee shops,” says Ferraro of their summer escapades.

After a couple of years of touring, sleeping in the van and living on ramen noodles, Ferraro and Bramberger moved to Toronto and started hunting around for a couple of new bandmates. Wise, who was studying jazz at the University of Toronto, saw their poster advertising for a guitarist and auditioned. “It really wasn’t until I hooked up with Nathan and Daenen that I was opened to the art side of pop music,” says Wise. “It’s not all fluffy-duffy stuff.” Ferraro called on his buddy bassist Mike Kirsh to complete the quartet.

Pretty soon they were cutting a demo of their own, which caught the attention of Gavin Brown, the Juno Award–winning producer who has worked with Sarah Harmer, Billy Talent and Three Days Grace. Brown produced the Midway State’s first EP, Met a Man on Top of the Hill, which earned them gigs opening for the likes of Avril Lavigne, Theory of a Deadman, 54-40, Shiny Toy Guns, Collective Soul and Lifehouse.

“It’s an amazing way to see the world,” says Ferraro of going on tour. “Every night, the moment before going onstage, the body goes to a different place. There’s an incredible buzz. You don’t have to think about what you’re doing.”

It’s a different story when the band is not on the road. They’ve only been back in Toronto a couple weeks, but they’re already hard at work plotting global domination. “We’ve got Edgefest, which is like summer camp for us, hanging out backstage with all these great bands, and our second album to work on and then a European tour in the fall, and we may even move to the U.K.,” says Ferraro.

In the meantime, the band will continue to hang out in Wise’s mom’s basement and keep downing burgers at the Golden Star (Yonge, north of Steeles). “We went there every day for lunch during high school, and now it’s like our unofficial hangout,” says Wise. “We go there for band powwows.”

All of which puts the band exactly where their name suggests, in a midway state, no longer scraping to get by, not quite filling stadiums on their own mega-tour. “We’re in a really good place right now,” says Wise. “Though it’s not like we’re opening for Radiohead. They’d never have us. They’re too cool for us.”