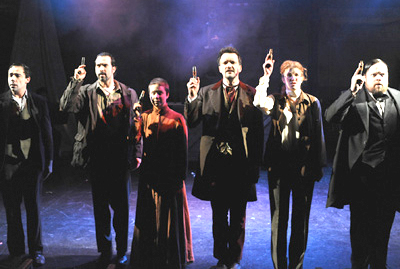 I’m still gasping.  My wife and I are still shivering from the utter brilliance of Assassins, based on Stephen Sondheim’s music and lyrics and Jerome Weidman’s book.

I know this Sondheim show almost by heart, having seen it performed four times before (once on Broadway).

Here’s the ultimate compliment:  walking out of the ancient building on Queen Street West, I turned to Merle and said, “I feel as if I’ve experienced this great musical for the first time—and understood it for the first time, too.”

The direction, by local, handsome, singer-actor Adam Brazier, whom I have long admired, is so inspired, I can flatly say that I have never, ever seen a more perfectly-directed show—and that includes many, many dozens of productions at Stratford, Shaw and Broadway; hundreds in all.

I’m not exaggerating here.  What is more thrilling?  To see a majestic, perfectly-paced, exquisitely-sung musical for only a few dollars a seat or to see the coming together of two impressive, non-profit theatre companies — Toronto’s Birdland Theatre and Barrie’s Talk is Free Theatre — which somehow managed to obtain the time, energy and skills of several of Stratford and Shaw’s finest singers/performers?

I could write for pages about how brilliant this musical is—and to see it just hours after the horrific murders and near-assassinations in Tucson, Arizona—was overwhelming.

Sondheim’s and Weidman’s thesis is profound and daring:  that the American promise that every citizen can “pursue happiness” can lead to the belief that if they don’t achieve that happiness, well, they can always reach for fame through murdering their elected leaders.  Wow.

I have long admired that giant of Stratford, Graham Abbey, but even his Romeo, Macbeth and Prince Hal were not as glorious as his Samuel Byck here (he was the until-now-pretty-forgotten failed assassin of President Nixon).

Paul McQuillan’s John Wilkes Booth, the killer of Lincoln, is equally astonishing (and that voice!), and Geoffrey Tyler’s Lee Harvey Oswald is agonizingly chilling.  Americans know most of these people as part of their history, but when they all lead up to the shooting of John Kennedy, there was gasping and tears in the audience.

How can non-profit theatre companies obtain such excellence, such brilliance, from a fledgling director such as Brazier, and obtain such perfect-pitch acting and singing from some of the finest actors in Canada today—in a show which runs for barely more than two weeks in January—and a few months after almost the same cast won the 2010 Dora for Outstanding Musical?

And in a cavernous 19th century hall which seems to hold less than 100 seats?