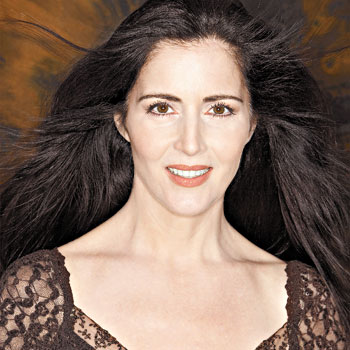 Back in the ’80s, when I was hosting shows on MuchMusic, Camilla Scott was hosting her successful daytime talk show on CTV.

I was in the audience for her dynamic performance in Mama Mia! I envied her working with hunkster Paul Gross in Due South. Through the years, I chuckled every time I heard her voice as Mama Bear in the Berenstein Bears animated series.

Both of us were hard working career women. Neither of us had interest in kids.

Of the two of us I was first to pop out a Mini-Me. I bumped into Scott at a voice audition in 2006. She’d moved back from N.Y.C. and recently had given birth to Jack. She was understandably tired but happy. Motherhood looked good on her.

I recently reconnected with Scott who continues to reinvent herself while raising Jack, now four and a half.

There’s a bond between us –—both working moms managing to have kids and a career.

While I found the transition to motherhood difficult, Scott and her actor husband Paul Eves embraced being new parents. “It was like Christmas every day” gushed Scott.

When asked how having Jack has changed her life, she says, “He’s the centre of our universe. All our decisions now are about what will provide the best life for him. It’s our responsibility to help him become an extraordinary human being.”

They share parenting duties with Paul doing all cooking, and a couple of their close friends swooping in to babysit when necessary.
Picking the right school for her son has been top of mind.

While she and Paul both attended public schools and received good educations, there was no question little Jack would be going private.

“Schools are different now. When we went to public school, the music program was amazing, there were drama and choir after-school programs. That doesn’t exist any more.”

Currently in preschool, the plan is for Jack to attend private school in Grade 1. Rather than hire an educational consultant to advise them on schools, Scott went to friends.

“My girlfriend’s 16-year-old son went through York’s IB program. He’s the most polite, groovy, well-educated and worldly kid. That’s what we want for Jack. If we can afford it, why not give him every opportunity.”

Scott and I have a chuckle about the Canadian star system and acknowledge that a busy career doesn’t always translate into a large salary.

Rather than worry about the next acting gig, Scott was presented with an opportunity from singer-songwriter Amy Sky to develop a part-time home-based business with Arbonne cosmetics.

“I became a consultant so I could be home with my son when I chose to,” says Camilla.

The actress has no qualms revealing how, after only five months, this part-time career has added thousands of dollars to her monthly income and that she will be presented with a Mercedes Benz for her high sales.

“I love being a mother,” she tells me. “I’m not so neurotic. The focus is off me. Life used to be exhausting as a full-time actress. Now it’s not. I have more important things to do. I have to pick up my son at school.”