The Postelles tear it up at The Garrison | TRNTO.com
Skip to content 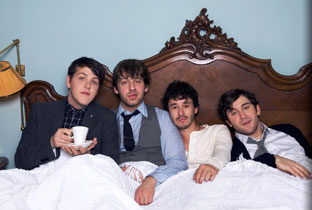 With NXNE in full swing last night, The Garrison was the place to be. New York band The Postelles were in full rock-star mode, proving without a doubt that they are a band to watch out for. The band took the stage at 11 p.m., following a supreme shoegazer effort by Baltimore’s Lower Dens that left the crowd in a despondent mood, contemplating what it all meant. But that soon changed.

Fresh on the heels of the release of their self-titled debut album (produced by Albert Hammond Jr. of The Strokes fame), The Postelles won the crowd over after a handful of chords thanks to their engaging frontman Daniel Balk, who appeared set on pulling rock star moves to pick up the entire crowd in attendance. Whatever. It works. Throw in the twin towers on lead guitar and bass in David Dargahi and John Speyer, not to mention Billy Cadden on drums, and the band packs a rhythmic wallop that left The Garrison swooning after a short but ridiculously sweet set.

The band has a garage rock flair reminiscent of early Strokes, but offers up a bit more rock ‘n’ roll revival to the mix, plus a nod to ’50s rockabilly. A cover of ‘Hound Dog’ nearly brought the house down.

The Postelles have had a few label flirtations, but released their album independently. Still, it’s only a matter of time before these guys break out.