The Race For Mayor: Sketchy the Clown ready for the city hall circus | TRNTO.com
Skip to content 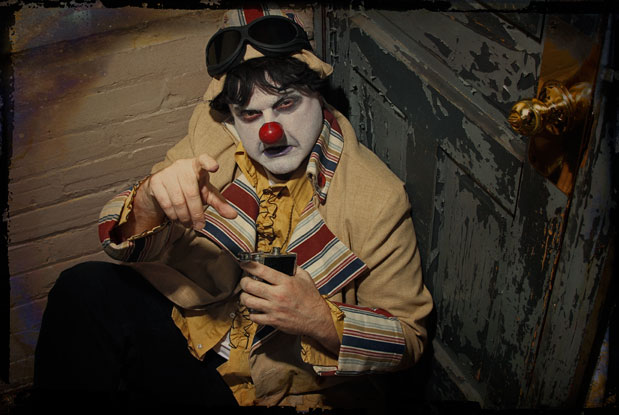 At last count, 43 candidates are running to become mayor of the city of Toronto. The “media” have decided the five “legitimate” candidates, but what about the other 38? Take Sketchy the Clown, for instance. As he is fond of saying, city hall is a circus and who better to run the show than a vaudeville clown? Here’s what Sketchy thinks.

How has being a clown prepared you for running a massive city such as Toronto?

Being a clown may be the worst preparation you could do to prepare for running the city. Slapstick and schtick won’t help you build a consensus among councillors for city planning. It will make me popular in the lunch room, though.

Would you wear the makeup to work every day?

I wear makeup, a red nose, and hat. If the people elect me, that’s what they get.  If for some strange reason I am elected, I may not actually be able to enter city hall. I was told by a security guard that masks are not allowed in city hall, though I could not find any bylaw stating this. The current council can take this a warning that they have six months to pass a bylaw to enforce this.

If Rob Ford was a clown, what type of clown would he be?

I don’t think Rob Ford is a clown. One of the reasons that I’m running is to let people see what a clown really is. If you want to go with some sort of comparison, I’d say that Rob Ford is a carny. He is not a performer; he’s that guy taking tickets beside the spinning cups ride who would rather be somewhere else than listening to your kids whine about not getting enough cotton candy.

You’re a bit of a creepy clown — have you made children cry?

I stay away from kids. They make a lousy audience. They never get any political or pop culture references, sexual innuendo eludes them, and they never buy enough drinks at the show for you to hit the bar minimum.

What is the biggest problem at city hall and how can you fix it?

The city needs some other ways of generating revenue. The province controls the limits on what the city can do around taxation. It is all stated in the City of Toronto Act.  The car registration tax and the property (land) transfer tax were granted to the city. Those were regressive and I’m not sorry to see the registration tax gone. How would I fix this? No idea. The problem is broken.

Are you for or against jets at the Toronto Island airport?

I’m against jets at Billy Bishop airport. Last I checked, Billy Bishop himself flew a prop plane. I think we should get rid of the airport and extend the nude beach. Not everyone needs to fly, but everyone is naked under their clothing.

And where do you stand regarding the proposed Scarborough subway line?

I like subways. I usually stand near the door. Not on the side that the door is opening. I’m large and that would make me a big obstacle to commuters in the morning when they are grumpy and their coffee hasn’t kicked in yet. You can stand in LRTs too and they look like space trains, so I’m for LRT in Scarborough.

How can you possibly get tough on crime as a clown?

I’m tall—not Chief Blair tall, but tall—and I kind of look intimidating. Maybe if I promised to lurk in dark alleyways, that would scare off the criminal element. Wouldn’t you feel much safer if a large weird man with a mask and strange costume came out of the dark while you are all alone at night? It works for Batman.

If the election is close and you needed to throw your support to another candidate, who would that be?

I actively tell people not to vote for me. I do tell them to say they are supporting me when asked by pollsters. Hopefully this will make me show up in the polls and have people misinterpret that as actual support. Then when the election is close for the front runners, they will court my support. I will then carefully consider what they have proposed, their experience, and how well they do in a massive pie fight.

Which councillor are you most looking forward to enterataining if elected?

I live in the Casa Loma neighbourhood. My councillor is Joe Mihevc. I’ve met him a few times. I like the sound of his laugh. I think I would do weird things like play peek-a-boo over his desk and put googly eyes on the back of my head. You know, the kinds of things he wouldn’t be expecting when he gets up in the morning and puts on his councillor pants to go to work.

What would you do to bring more jobs to Toronto?

One of the things the city does is try to increase economic activity in underutilized areas. I think we have an untapped potential for small business entrepreneurs, but they find it hard to afford commercial space. I’d like to make special economic zones in town where zoning variance requests would be expedited to get more commercial residential employment (CRE) buildings. Hmm, that sounded serious. OK, for your entertainment pleasure, I will now put a pie in my face.

How would a downtown clown such as yourself appeal to suburban residents?

Clowning is universal. I want to represent everyone in the city. Whether you pronounce it Torontoe, Trawna or Trawno, I’m the clown for this town!