The relationship between mental illness and creativity | TRNTO.com
Skip to content 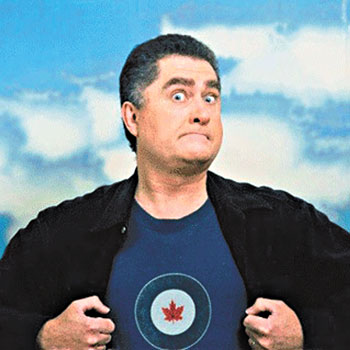 Just before the holidays, I had the honour of hosting the Rendezvous with Madness gala for the Centre for Addiction and Mental Health.

Rendezvous with Madness is an arts festival that has been going strong for over a decade that explores the relationship between madness and creativity.

When I was asked to take part in a show that explored the connections between madness and comedy, I jumped at the chance. I’ve long joked that you have to be a little nuts to be in the comedy business. And if you weren’t crazy going in, you’d get there soon enough. But that’s just the most superficial approach to the issue.

I’ve noticed that the language of insanity and that of comedy are remarkably similar. What is the name of the most successful humour magazine? Mad. Call a comedian crazy, and he’ll take it as compliment. Only one letter separates “wacky” from “wacko,” after all.

Meanwhile, a comedy club in Halifax was named the Nuthouse. A comedy night at Ryerson was called The Loonie Bin (and admission was only a dollar, a clever double pun). And let’s not forget those “wild and crazy guys” from Saturday Night Live. I would imagine that the truly ill would bristle at all this trivialization of their pain. But it’s also not so funny when we look at comics who are suffering from various forms of mental instability.

The first to consider are the simple neurotics, and I’ll include myself here. I have been under the care of a variety of psychologists, psychoanalysts and psychiatrists for much of my life, sometimes not even by court order. But one level deeper are those who struggle with more provocative issues.

Addiction is a major problem in the comedy business. Delving even deeper into the misery continuum are the bipolars. For the gala, the festival flew in Mike MacDonald, who did a 40-minute routine about his illness. MacDonald is unusually candid about his manic depression, which may frighten away producers but earns him hero status in my book.

Later, in a panel discussion between myself, MacDonald and Dr. Joel Jeffries, who kindly lent his professional opinions to the event, the talk turned darker, to the high incidence of suicides among comedians.

But in Vancouver, David Granirer, a former mental patient turned comic, is bringing the issue out into the light. Granirer teaches a comedy course that is open only to people with mental issues. At the end of the course, his students perform a show that is, by all accounts, touching and quite funny.

One of his most successful alumni is Melanie Rose, a B.C. resident who contacted me and invited me to watch her five-minute routine on YouTube. She was very funny. Is this a new direction for comedy? We’ve seen the rise of black comedy, women’s comedy, gay comedy, Asian comedy, and just when you think we were running out of subcultures, here come the mental patients. Is this the new trend? Crazier things have happened.