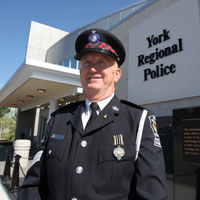 For Richmond Hill’s Michael Yarlett, the York Regional Police motto “Deeds Speak” is not just a phrase, but also a way of life.

For the past 28 years, Yarlett has dedicated his time and talent to the York Regional Police Auxiliary Unit, rising through the ranks to staff sergeant while also volunteering as part of the bicycle and search and rescue units.

And now, with more than 7,000 hours of service under his belt, Yarlett has been chosen as this year’s recipient of the York Regional Police Volunteer of the Year Award, in recognition of his contribution to the service and his local community.

But Yarlett remains modest when it comes to talking about his impressive record.

“There are tons of these stories out there,” he says. “I’m not a hero, I’m just another volunteer.”

As part of the York Regional Police Auxiliary Unit, volunteers are trained to assist full-time police officers in their day-to-day duties and even act in the role of a police officer if the need should arise.

Over the years, Yarlett says he has done everything from knocking on doors and handing out pamphlets to assisting with arrests. He has also helped police during two visits from the Pope, Rolling Stones concerts and national and provincial police memorials.

Yarlett says he credits his parents, who were active in the church community, as well as the blood donors he met as a teen through local blood drives, for inspiring him to become involved with his community.

“I saw people giving their time,” he recalls, “and I was impressed because they weren’t getting paid, and they were donating their time to help out.”

On top of his volunteer work with the police auxiliary, Yarlett is also passionate about his involvement with the York Regional Police Male Chorus, which he joined in 1991.

The chorus performs at community events across York Region, and over the years, he has dedicated more than 2,000 hours as a tenor and assistant chorus marshal.

“I love it,” he says. “There is great camaraderie there, and it is very uplifting to be part of it. We go to seniors’ homes; do fundraising concerts for churches, police funerals and the memorial in Ottawa each September.”

And now, as Yarlett eyes retirement from some of his more demanding volunteering duties, he says he will continue his work in the community as a canvasser with the Canadian Cancer Society as well as Out of the Cold, an interfaith group dedicated to helping the homeless.

“I’ll always be volunteering to some degree,” he says. “I also plan to continue being a volunteer for the chorus and search and rescue.”

Of course, Yarlett says none of this would have been possible without the support of his family — his wife, Cathie, with whom he will celebrate his 40th wedding anniversary this September, and his five daughters.

“Obviously the biggest thing is to have somebody behind you,” he says. “My wife is a very good lady.”