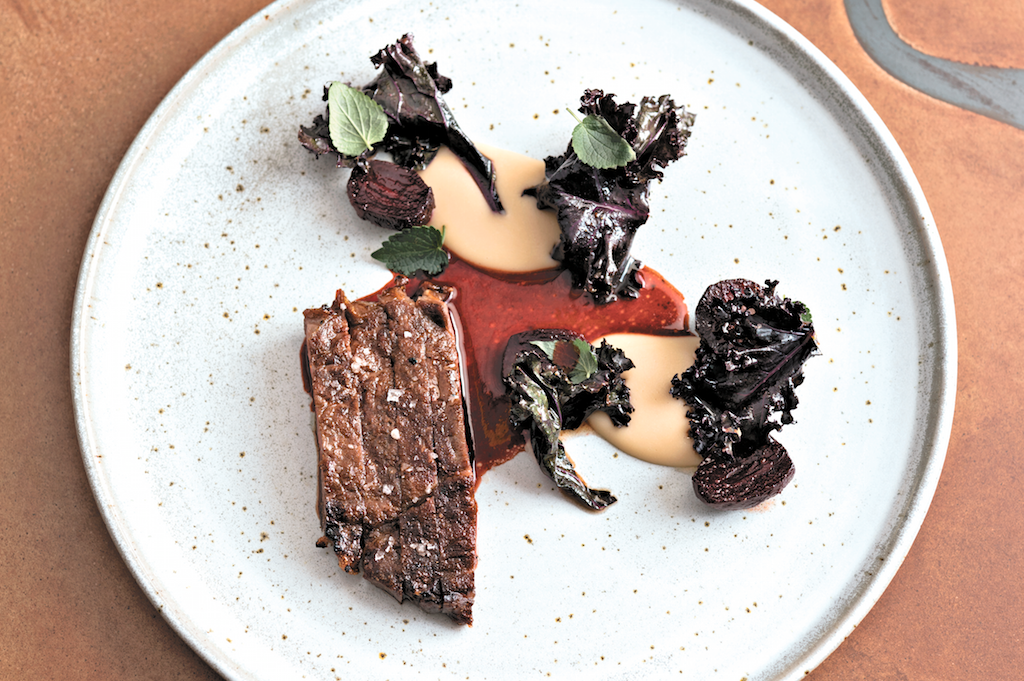 Chef Daniel Hadida doesn’t much care for lemons. He says relying on them is boring and that it signals a lack of creativity. Much better to ferment something acidic himself, like an emerald-green asparagus vinaigrette that somehow, magically, tastes like yuzu.

“Lemons are lazy,” he says. “As a society, we’ve chosen to import this thing that’s the lowest common denominator of acidity.”

That opinion might be unconventional, but then again, so is the Restaurant at Pearl Morissette, which Hadida opened with his co-chef and creative partner, Eric Robertson, in late 2017. Located on the grounds of the esteemed Pearl Morissette winery in the Niagara countryside, it’s a minimalist haven serving locally inspired cuisine that’s defying genres and turning heads.

Walking through the restaurant, it’s clear there are many other things Hadida doesn’t like. He doesn’t like it when chefs don’t clean up their own mess, so everyone in the kitchen takes turns on dish duty. And although he says he’s still dependent on refined sugar for desserts, he’d like to stop using it completely, because it’s unhealthy and — wait for it — boring.

Then there’s the issue of picky customers, which Hadida and Robertson sidestep by serving a $95 seasonal tasting menu that’s served blind: patrons discover what they’re eating only when the dishes are brought to the table.

“We will placate … customers,” Hadida claims, “but not when they’re wrong. That’s where we draw the line.”

Such preferences are probably why the restaurant is on its way to becoming a full-fledged dining destination. In 2018, it topped enRoute’s best new restaurants in Canada list, and earlier this year, it snagged number 14 on Canada’s 100 Best Restaurants list.

Hadida is aware that he can come across as arrogant. His co-chef Robertson is more subdued, but they both feel that they’ve gone beyond opening a restaurant. As might be expected for a pair of idealistic millennials (Hadida is 31, Robertson is 33), they both have a deliberate social justice bent.

They don’t want to just have a low carbon footprint — they want to actively benefit the land. So they’ve planted trees and built two ponds on the property to attract wildlife and encourage biodiversity.

Lofty intentions pervade the restaurant proper as well. There is no tipping; staff are all salaried and earn a yearly bonus. The restaurant also supports temperance, with an extensive non-alcoholic pairing option where one might find kombucha and other beverages crafted from waste items, such as apple peels.

“Hopefully we can influence people to think about things differently,” Robertson says.

There is a palpable effort to highlight the flavours of the Niagara landscape with wild-fed Berkshire pork and foraged herbs — although, incongruously, there are numerous seafood items from the East Coast. Especially intriguing is the use of weeds, including dandelion petals, sheep sorrel and Japanese knotweed.

“It’s an invasive species,” Robertson says of the knotweed, “so we try to eat up as much as we can.”

The two chefs met in Europe while beefing up their resumés at Michelin-starred restaurants. Hadida, a Toronto native, got his start as a dishwasher at Casey’s and was never formally trained. Still, he would end up gradually working his way into top-tier restaurants such as Le Chateaubriand in France and Pujol in Mexico, an ascent he attributes to “obstinacy, narcissism and a little bit of luck.”

Robertson, who grew up in Brantford, Ont., paid his dues at a breakfast diner and at Pita Pit before eventually graduating from the Stratford Chefs School. He, too, would end up in some of the world’s best kitchens, including In De Wulf in Belgium and Langdon Hall in Cambridge, Ont.

By late 2015, Hadida was tired of travelling. So when he heard that Pearl Morissette was looking for someone to cook for staff and private events, he gave it a shot.

“We thought this could be a playground for someone with the right mindset,” says general manager Milton Mednick, who hired Hadida.

The winery didn’t have a restaurant, yet, but Hadida and the team at Pearl Morissette began to see potential in the property, and suspected that something substantial could be done  that paid tribute to the low-intervention ideology espoused by winemaker François Morissette.

“Daniel had drive, ambition and hunger. He was someone not content with just doing something good,” said Mednick.

Pearl Morissette’s investors gave Hadida the support he needed to be ambitious. He planted gardens and raised livestock. He worked with the Design Agency to create a 38-seat restaurant inside a barnlike tractor building on site. The result is a bright, vaguely Nordic space, with 200-year-old barn wood floors and large windows overlooking the Niagara countryside.

Midway through the opening process, Hadida hired Robertson, whom he had always respected and believed was talented enough to co-helm the kitchen with him. The way they see it, they’ve just begun setting their vision into motion.

“This restaurant changes faster than anywhere else I’ve ever worked,” Robertson says.

Whatever they’re doing, it’s working: reservations are booked three months in advance. It’s an outcome that they hoped for but didn’t necessarily expect.

“There were moments wondering, ‘Who’s going to come here?’ ” Hadida says. “Turns out, a lot of people will.”