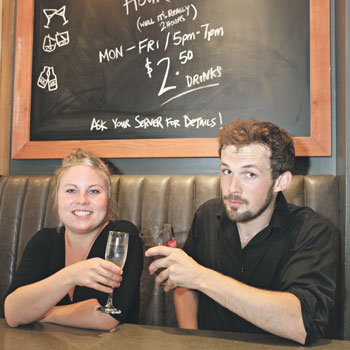 How did happy hour return, you may ask? Well, as long as you don’t call it that, an adjustment to provincial liquor regulations a few years ago allowed bars to charge different prices at different times of day. With patio season upon us, Toronto has seen a recent surge in the number of bars offering happy hour–inspired specials. But law enforcement and regulatory agencies caution that establishments offering the specials must be aware of their responsibilities.

In Thornhill, the Tickled Toad Pub and Grill sells $5.25 tallboys from Monday to Friday between 4 and 6 p.m. In Richmond Hill, Archibald’s Pub has a weekday deal on domestic draft from 2 to 5 p.m., selling pints for $4.95.

Every weekday, from 5 to 7 p.m., Queen Street East’s Joy Bistro offers mixed drinks and domestic beer for $2.50 and imported beer for $3.50. According to Andrew Bridgman, one of Joy Bistro’s owners, their promotion was instituted three months ago to increase business and promote recent renovations.

Although happy hour is a widely understood concept, in Ontario restrictions have been placed on the selling of inexpensive drinks since 1984.

According to Lisa Murray, a spokesperson for the Alcohol and Gaming Commission of Ontario, the ban on happy hour was partially due to the fact that the title promoted immoderate consump-tion. “One of the tenents of the Liquor Licence Act is you can’t serve someone to intoxication,” said Murray.

In 2007, the Alcohol and Gaming Commission of Ontario adjusted the ban on the beloved after-work special, once again making it legal for bars to change their drink prices throughout the day as long as they don’t advertise it as “happy hour” or use phrases such as “cheap drinks.”

This change came alongside the introduction of a minimum price for standard-sized drinks, of $2 including tax.

Penalties for violating the regulations depend on the circumstances, ranging anywhere from a warning to a fine to a liquor licence revocation.

Public safety is the prime goal of the regulations, Murray explained. When individuals drink to the point of intoxication, they pose a risk to themselves and others.

“This is how fights break out or someone stumbles and falls and hurts themselves and, hopefully, they don’t get in their car and drive away,” she said.

Andrew Murie, the CEO of Mothers Against Drunk Drivers Canada, said the original ban was brought in after research showed that people drank more in less time when drinks were priced lower, which raised concerns about the problems that can arise when people consume alcohol without making plans for getting home.

“There is nothing wrong with the promotion itself,” Murie said. “As long as it is done in a safe and responsible way.”

Robb Knapper, staff sergeant for Toronto Police Service’s traffic services, believes that regardless of what rules are in place there will always be some people who choose to drink and drive.

“You, unfortunately, still see it from the sporting events where alcohol is quadruple the price of anywhere else, and people still manage to consume far too much and then choose to drive,” he said.

But Knapper pointed out the cultural shift that has taken place since 1984.

Drinking and driving is less acceptable and penalties are much harsher.

Servers working in licensed establishments are now required to get their Smart Serve — a certification program for serving alcohol responsibly — which creates awareness.

This is important because Knapper said establishments also bear more of an onus, as evidenced by recent civil cases resulting from drunk driving incidents.

When asked how staff members at Joy Bistro prevent their clientele from overindulging on the cheaper drinks, Smith explained that the special only runs for two hours.

She added that shots are not a part of the special, and individuals are only allowed to order one drink at a time.