The rise of the city's new culinary king | TRNTO.com
Skip to content 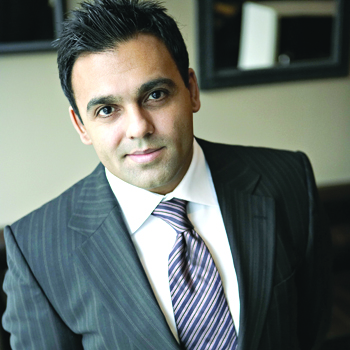 He is said to have the Midas touch: a guy who can smell the next big thing from a mile away, find it, package it and bring it to market before most realize what’s going on. Not bad for a quiet kid from Flemingdon Park who started his rapidly expanding culinary empire with a little coffee shop on Dundas Street West.

Hanif Harji is the man behind such Toronto hot spots as Kultura, Nyood, Colborne Lane, Doku 15, Blowfish and the recently opened Madras Pantry, but you would never know it from talking to him.

“I am still that broke-ass kid from Flemingdon Park,” he says. “Mine is not a rags-to-riches story. My theory in life is put your head down and work really, really hard. Try to be innovative and think outside the box, partner up with really smart people who add value, and hopefully you have made an impact in the industry and in your bank account.”

So how does a kid who grew up in one of Toronto’s many multicultural neighborhoods end up with a mini-empire?

Harji moved here from Tanzania when he was six. His parents bought a convenience store, and his father worked for the TTC. It was while he was at the University of Toronto that he got it into his head to go into business for himself, so right out of school, he bought his first coffee shop.

“The coffee business was a growing market at the time,” he says. “Then I just fell in love with the hospitality industry and evolved through there, working with really smart people and hotels.”

Harji went from slinging coffee and serving up fast food to owning his own restaurant in 2004, with the sushi and sake bar Blowfish.

“I had been doing some consulting work overseas and working with some really interesting chefs and hotels, and I kind of got homesick and decided I wanted to do it for myself instead of for other people,” Harji explains.

“So I found a really great location on Bathurst Street. Susur had just opened his restaurant there, and it was up and coming. I partnered up with some smart people, a really good chef and came up with this idea to do a really hip Asian concept, and people really took to it.”

And from there, a trend was born. Pan-Asian fusion exploded, as did Harji’s business, which was bolstered by his partnership with chef Roger Mooking, whom Harji had met while Mooking was working the kitchen at Barrio.

“We immediately hit it off. As you know, he is a very charming guy and is very skilled at making people feel comfortable,” says Mooking. “We had a similar sensibility, he seemed to enjoy my food and Barrio, and we went from there. He is one of the smartest people you will ever meet, and I only like to surround myself with the best players in everything I do. He is definitely one of those people.”

Harji’s current locations are some of Toronto’s most popular restaurants — hits with critics and the public, alike.

A go-to place during the Toronto International Film Festival, Kultura has been described as “damn gorgeous” by Joanne Kates and “lots of fun” by James Chatto, which is a testament to Harji’s good taste.

It sits in one of the oldest retail spaces in Toronto, and the look is modern without losing the beauty of the original structure.

“We are very design focused and hate buying out of catalogues, so we try to work with people who can innovate with us and help us bring to life what we envision in our head,” says Harji.

Nyood, the next on Harji’s growing list of funky downtown eateries, started off with a bit more controversy. Harji had partnered up with Claudio Aprile on the restaurant Colborne Lane and had planned to open Bar Crudo in the West Queen West space, before their relationship went sour.

Their partnership dissolved, Aprile stayed at Colborne Lane, and Harji kept the Bar Crudo space already equipped with glass French doors and a huge chandelier made from utility lights and thick black wire.

Following the success of Nyood, Harji’s latest venture is Madras Pantry where you can grab a hand-held dosa and head across the street to Trinity Bellwoods Park.

Just like Nyood and Kultura, Madras is decked out in a design from Commute Homes (819 Queen St. W.), owned by Sara Parisotto and Hamind Samad.

Brightly coloured carnival posters are mounted on the walls, Indian kitchen staples line the shelves, and the menu is scrawled out on a chalkboard behind the counter.

And Harji has no plans to slow down any time soon. Indeed, his most ambitious projects to date are just getting underway.

His company, Scale Restaurant Group, plans on opening a new “concept” in Burlington called Eatalia, a trattoria that will introduce the suburbs to informal Italian eating, and he has managed to get his hands on an old women’s prison in Liberty Village, which is in the very beginning stages.

But none of this is magic, according to Harji.

It is hard work and partnering with the right people. “I have a chef partner named Roger Mooking, who has his own television show named Everyday Exotic,” he says.

“He and I collaborate together and really look at what’s happening globally in the food world that we are passionate about and where we think it’s going. We really focus on the global approach to food, not the local approach to food. We like to see what global trends are happening. We think Spanish trends are hot right now.

“You know that singular genre tied in with Asian could do really well, so we start looking at concepts and testing menu items, trying to get a good feel for what we think will work. And we are all about flavours and ingredients and making food dance on your tongue.”

The duo also offers food and beverage management for hotels and are currently working with a company that owns Elora Mill Inn and the Benmiller Spa and Resort.

“He is a romantic and works well with high-level ideas, and I work well with execution, creativity in my own domain and management,” says Mooking, of the key to their partnership’s success.

“He works the front, and I work the back, and it is the perfect balance for effective restaurant management. I know how kitchen people think, work and feel, and he does the same at the front of house. I do my thing, and he does his. We peek into each other’s worlds, to get bigger-picture things sorted, but we stay focused on our areas of expertise, and I think it works.”

Harji is clearly thankful for those with whom he works closely.

“The reality is that I am very, very fortunate,” Harji explains.

“I have amazing partners, and I’ve had the good fortune of picking some good locations, and I don’t know about the Midas touch but definitely really great partners who have made things great for me.”

He makes it sound so easy.