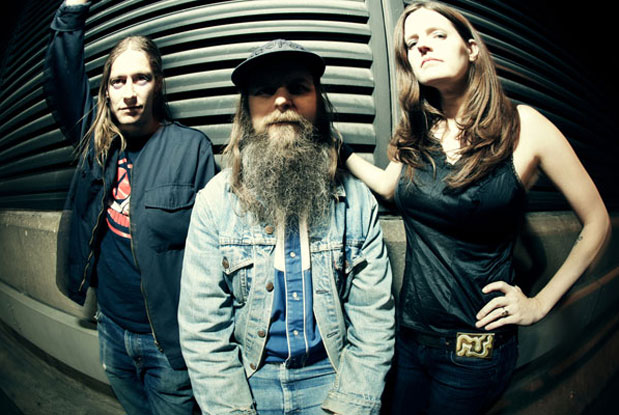 The coolest thing about this past Tuesday’s Fucked Up show at The Mod Club was the appearance of C'mon — Ian Blurton's killer three-piece outfit with his girlfriend Katie Lynn Campbell (ex-Nashville Pussy) and Dean Dallas Bentley — opening up the show. C'mon is calling it quits, but not before playing a few shows around town this month, including one on Oct. 20 at Cherry Colas and the big one on Oct. 22 at The Bovine Sex Club. They are also doing a live recording at Chemical Sound on Oct. 17, and you could be in the audience! Go to http://www.thisiscmon.com for details.

Below, a video of Blurton and some Toronto indie dudes covering Fucked Up’s “Generation” during last spring's Juno Awards anniversary party at the Horseshoe Tavern.

The recent 20th anniversary re-release of Nirvana's seminal grunge album Nevermind had us combing the archives for early footage of some of the band's super-charged Toronto concerts back in the day. Big thanks to a YouTube poster named Curmodgeon who put an entire 1991 concert at The Opera House online. These dudes were so fierce and angry, like so many young rockers, but had the talent to make a lasting mark on music history. The new two-album set is sweet with some seriously grungy early demos of classic tunes recorded on a ghetto blaster. Love it!

Seminal Toronto indie hipsters Broken Social Scene are breaking up, sort of, in a way, according to one band member, without any formal announcement as of yet. According to a story on The Huffington Post, one of the band's founding members, Kevin Drew, made some remarks that make it sound an awful lot like the end of the road for the musical collective. How ironic, given their latest record seemed to have the most cohesive unit behind it, with on-again, off-again members such as Leslie Feist, Emily Haines and others acting more as guests on a song here and there. Drew is quoted as saying of the break-up: “This is the healthiest thing we can do. There's no bad blood, no problems, everyone is at peace. We've had a lot of inter-relationships, some have worked, some haven't. But we all loved what we were doing. And I think we were always fair.” At press time, there was nothing posted on the band's website, and there are four more South American dates on the band's current tour and that's it. A spokesperson for the band's lab, Brendan Bourke, says, "BSS will never be officially over. Everyone just has other projects they want to concentrate for the time being. No "final" anything to report at this time." Ha! Vague until the very end. You gotta love it.

The closing night finale to the McLuhan100 conference will feature music by Polaris Prize winning group Patrick Watson and The Wooden Arms, with special guest Amy Millan of Stars fame. Patrick Watson and The Wooden Arms, easily one of the most creative groups to come out of Canada in some years, hasn't played a Toronto show in a while, so this one will be a hot ticket. Add the whole McLuhan cool factor, plus the fine acoustics of Koerner Hall, and you've got the ingredients for a very cool night of music. Date is Thursday, Nov. 10, $35. Check out www.rcmusic.ca for tickets.

Flashback … Monday? Evan Dando and The Lemonheads back into our arms

Music from the '90s has been a big draw as of late with many big Toronto acts getting back together to play a few shows, pocket some coin and comteplate what could have been: The Watchmen, The Doughboys, The Tea Party, Big Sugar and Lowest of the Low, to name a few. The pattern is repeating south of the border with the revival of The Lemonheads as Evan Dando slowly emerges from the drug-induced haze of the past decade or so. But here's the thing: the latest Lemonheads disc might be the best thing the band (well, Evan Dando) has done in a very long time. The Lemonheads check into Lee's Palace on Monday night, so before you start shouting “Into Your Arms” until you go hoarse, give his new stuff a listen. And the dude has style — Kate Moss and Liv Tyler both sing on Varshons.

“Let's bomb the boats and feed the fish.” Recognize the lyrics? If so, you'll be happy to learn that seminal local punk rock band Forgotten Rebels will soon get their own tribute album. Brad Pine of Brado Creamed Corn Recordings says the album is basically done and ready to be released worldwide. But, he's tight-lipped about the final lineup pending approval from the powers that be. The band, originally from Hamilton and fronted by the one-and-only Mickey De Sadist, has been one of the country's longest lasting and most successful punk rock bands, known for such catchy tunes as "Surfin' on Heroin" and "Little Girl."

Album of the week: Increase the Sweetness by The Golden Seals

Ottawa-based singer/songwriter Dave Merritt hasn't put out an album since 2003, so Increase the Sweetness, released last month, (Zunior) has been a long time coming. The new effort shows Merritt at his best, crafting old-school pop songs of a bygone era influenced by the likes of Nick Lowe. He's a solid songwriter with a strong voice and smart, inventive lyrics. Although ancient history now, some may remember Merritt as the frontman for London, Ontario band Adam West that turned out a couple of good albums in the early '90s, including Brunswick Hotel. They made some noise here in Toronto when their song "Things" caught the ear of some of the guys down at CFNY-FM back when they were still playing good indie tunes. Go here, buy the album, and good karma will come your way.

Go here to listen to Brunswick Hotel in its entirety.