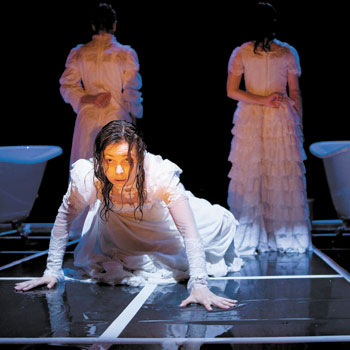 For decades now, the Tony Awards have honoured the plays and performers considered to be the best of the year. A new tradition has emerged in our fair city, and this year I am happy to present the second annual, and highly personal, Allan Awards of 2009. Catchy, I know.

The best free show of the year: The Tempest at CanStage’s Dream in High Park. Cut by 60 per cent and not always spoken clearly, this touching, funny Shakespearean comedy was given a delightful production. It was their most satisfying summer offering in years. Remember these names: Karen Robinson, Taylor Trowbridge, Patrick Kwok-Choon, Audrey Dwyer, Ron Kennell.

The finest production of a play by one of today’s best Irish playwrights: Rep 21’s Toronto premiere of Martin McDonagh’s The Lieutenant of Inishmore. This production was directed and produced by Rod Carley of Canadore College in North Bay, and it ran for less than two weeks in December 2009 and was one of the most entertaining shows of the year.

The best performance in a so-so production of a great play: Ari Cohen’s brilliant, angry, one-legged Moe in Soulpepper’s flawed production of Clifford Odets’s Awake and Sing. Accents were inconsistent, and most of their usually brilliant actors (and the always reliable director Miles Potter) failed to shine, but Cohen was superb.

The funniest, most vulgar musical perfectly performed: Dancap’s The Toxic Avenger at the Music Hall. How good to see a lovely, 90-year-old theatre on the edge of Greektown come to life. How joyful to see the profoundly talented Louise Pitre do great comic shtick, along with her always fabulous voice, as well as five other superior performers.

The wettest 75 minutes of awesome drama: Can go to only one group, Drowning Girls at the tiny Extra Space of the Tarragon Theatre. Beth Graham, Charlie Tomlinson and Daniela Vlaskalic wrote the stunning, unforgettable play about a serial killer who marries and then murders all three, a century ago. The three ancient bathtubs, with showers above, were central to both plot and action. Winner of several best play and best production awards in Calgary and beyond, I would not have missed this stunner for the world, and I hope it returns to Toronto.

The most memorable actors in a memorable (and hilarious) play: Diego Matamoros and Nancy Palk as George and Martha in Soulpepper’s Who’s Afraid of Virginia Woolf? Edward Albee’s most famous play is not the great work of art I thought it was, but boy, this production proved once again that, when Soulpepper is at its best, it is the best.

There you have the second annual Allan Awards.