The sun sets at a decades-old Greektown food market | TRNTO.com
Skip to content 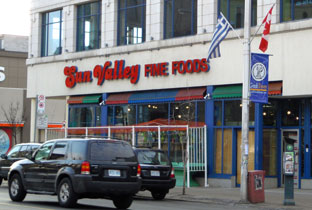 A year that has been tough on local, family-owned restaurants and fresh food shops appears to have claimed its latest victim. Sun Valley Fine Foods (583 Danforth Ave.), a Greektown staple for nearly three decades, is shutting its doors for good this Sunday. We were not given a specific reason for the closure, but were told that brand’s other location, the Sun Valley Market (468 Danforth Ave.), will remain open.

Gerry Aravantinos originally founded Sun Valley Fine Foods with his brother Steve 29 years ago. They quickly gained popularity by offering authentic Greek fare and fresh, quality produce. For much of the ’90s, it was a destination grocery store for Greek expats and others in the neighbourhood, and it was the site of plenty of activity on the Danforth.

Sun Valley Fine Foods’ closure (the location will possibly be replaced with a pharmaceutical outlet) is the latest in a string of family-owned food businesses that have been calling it quits around the city. Earlier this year, the neighbouring Greek House Food Market closed up shop, while Reither’s Fine Food International, Senior’s Steak House and, most recently, Marky’s have also thrown in the towel over the past few months.